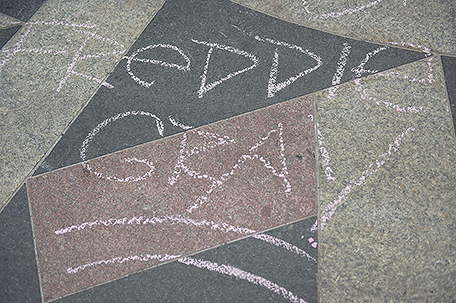 BALTIMORE — A 31-year-old woman and a young boy were shot in the head Thursday, becoming Baltimore’s 37th and 38th homicide victims so far this month, the city’s deadliest in 15 years.

Meanwhile, arrests have plunged: Police are booking fewer than half the number of people they pulled off the streets last year.

Arrests were already declining before Freddie Gray died on April 19 of injuries he suffered in police custody, but they dropped sharply thereafter, as his death unleashed protests, riots, the criminal indictment of six officers and a full-on civil rights investigation by the U.S. Justice Department that has officers working under close scrutiny.

“I’m afraid to go outside,” said Antoinette Perrine, whose brother was shot down three weeks ago on a basketball court near her home in the Harlem Park neighborhood of West Baltimore. Ever since, she has barricaded her door and added metal slabs inside her windows to deflect gunfire.

“It’s so bad, people are afraid to let their kids outside,” Perrine said. “People wake up with shots through their windows. Police used to sit on every corner, on the top of the block. These days? They’re nowhere.”

West Baltimore residents worry they’ve been abandoned by the officers they once accused of harassing them, leaving some neighborhoods like the Wild West without a lawman around.

“Before it was over-policing. Now there’s no police,” said Donnail “Dreads” Lee, 34, who lives in the Gilmor Homes, the public housing complex where Gray, 25, was chased down. “People feel as though they can do things and get away with it. I see people walking with guns almost every single day, because they know the police aren’t pulling them up like they used to.”

Police Commissioner Anthony Batts said his officers “are not holding back,” despite encountering dangerous hostility in the Western District.

“Our officers tell me that when officers pull up, they have 30 to 50 people surrounding them at any time,” Batts said.

Protesters said Gray’s death is emblematic of a pattern of police violence and brutality against impoverished African-Americans in Baltimore. In October, Batts and Mayor Stephanie Rawlings-Blake invited the Justice Department to participate in a collaborative review of police policies. The fallout from Gray’s death prompted the mayor to ramp that up, and U.S. Attorney General Loretta Lynch agreed to a more intensive probe into whether the department employs discriminatory policing, excessive force and unconstitutional searches and arrests.

Baltimore was seeing a slight rise in homicides this year even before Gray’s death April 19. But the 38 homicides so far in May is a major spike, after 22 in April, 15 in March, 13 in February and 23 in January.

Ten of May’s homicides happened in the Western District, which has had as many homicides in the first five months of this year as it did all of last year.

Non-fatal shootings are spiking as well — 91 so far in May, 58 of them in the Western District.

The mayor said her office is “examining” the relationship between the homicide spike and the dwindling arrest rate.

Even before Gray’s death, police were making between 25 and 28 percent fewer arrests each month than they made in the same month last year. But so far in May, arrests are down roughly 56 percent. Police booked just 1,045 people in the first 19 days of May, an average of 55 a day. In the same time period last year, police arrested 2,396 people, an average of 126 a day.

In fact, police did not make any arrests in the triple digits between April 22 and May 19, except on two occasions: On April 27, when protests gave way to rioting, police arrested 246 people. On May 2, the last day of a city-wide curfew, police booked 140 people.

At a news conference Wednesday, Rawlings-Blake said there are “a lot of reasons why we’re having a surge in violence.”

“Other cities that have experienced police officers accused or indicted of crimes, there’s a lot of distrust and a community breakdown,” Rawlings-Blake said. “The result is routinely increased violence.”

“It’s clear that the relationship between the commissioner and the rank-and-file is strained,” she added. “He’s working very hard to repair that relationship.”

Emergency response specialist Michael Greenberger cautions against directly blaming police. The founder and director of the University of Maryland Center for Health and Homeland Security, the spike in homicides is more likely a response to Gray’s death and the rioting.

“We went through a period of such intense anger that the murder rate got out of control. I think it’s been really hard for the police to keep on top of that,” he said.

“There was a shooting down the street, and the man was standing in the middle of the street with a gun, just shooting,” Lee added. “Usually, you can’t walk up and down the street drinking or smoking weed. Now, people are everywhere smoking weed, and police just ride by, look at you, and keep going. There used to be police on every corner. I don’t think they’ll be back this summer.”

Batts acknowledged that “the service we’re giving is off-target with the community as a whole” and he promised to pay special attention to the Western District.

Veronica Edmonds, a 26-year-old mother of seven in the Gilmor Homes, said she wishes the police would return, and focus on violent crime rather than minor drug offenses.

“If they focused more on criminals and left the petty stuff alone, the community would have more respect for police officers,” she said.