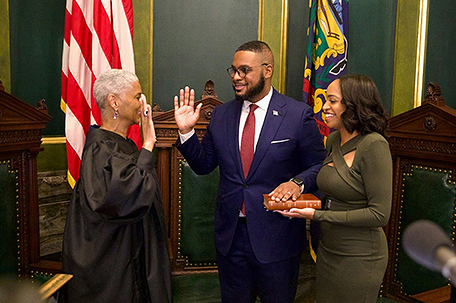 HARRISBURG, Pa. – The son of a union bus driver and hairdresser, a proud native of a steel town and a first-generation college graduate, Austin Davis today became the Commonwealth of Pennsylvania’s first Black lieutenant governor, joining a growing group of leaders of color serving as their states’ second-highest executive.

“Today we are sending a message to the next generation of leaders – young people across our state, and especially Black and brown young people – that Pennsylvania has and will always be a place where all are welcomed and where everyone has the opportunity to succeed,” Davis said in his inaugural remarks. “I say to all the young people watching right now, who are worried and unsure about their future – that the American Dream is alive and well in Pennsylvania. That no matter how you grew up, no matter where you come from, or what you look like – this Commonwealth will always be a place where you can create your own destiny.”

Davis’s election is historic for multiple reasons. At the age of 33, Davis is now the youngest lieutenant governor in the nation.

Davis got an early start in public service. After the epidemic of gun violence punctured the safety and security of his neighborhood in McKeesport, he lobbied the mayor to create a youth advisory council. He then went on to work for the Pennsylvania House of Representatives and Allegheny County Executive Rich Fitzgerald.

In 2018, Davis joined the legislative body where he had worked just a few years before, winning a special election to the state House, becoming the first Black legislator to represent his majority-white district. He chaired the Allegheny County House Democratic Delegation and was the vice chair of the House Democratic Policy Committee.

Pennsylvania’s lieutenant governor must fulfill the duties of the governor if he or she is incapacitated for health reasons or steps down.

As lieutenant governor, Davis will also chair the state Board of Pardons, which hears requests for pardons and commutations, and will preside over the state Senate. He will also serve as a member of the Pennsylvania Emergency Management Council, a member of the Military Base Community Enhancement Commission and chair of the Local Government Advisory Committee.