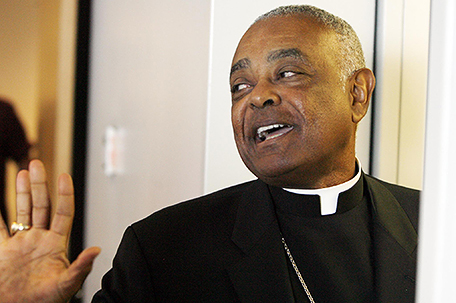 ATLANTA — The Roman Catholic Archbishop of Atlanta apologized Monday for building a $2.2 million mansion for himself, a decision criticized by local Catholics who cited the example of austerity set by the new pope.

Archbishop Wilton Gregory recently moved into a nearly 6,400-square-foot (595-square-meter) residence. Its construction was made possible by a large donation from the estate of Joseph Mitchell, nephew of Margaret Mitchell, author of “Gone With The Wind,” the Civil War epic that made his family wealthy. When Mitchell died in 2011, he left an estate worth more than $15 million to the archdiocese on the condition it be used for “general religious and charitable purposes.”

Gregory said that he has received criticism over the spending in letters, emails and telephone messages.

“I am disappointed that, while my advisors (sic) and I were able to justify this project fiscally, logistically and practically, I personally failed to project the cost in terms of my own integrity and pastoral credibility with the people of God of north and central Georgia,” Gregory said in a column posted on the website of the archdiocesan newspaper, The Georgia Bulletin.

“I failed to consider the impact on the families throughout the Archdiocese who, though struggling to pay their mortgages, utilities, tuition and other bills, faithfully respond year after year to my pleas to assist with funding our ministries and services,” he added.

The Catholic leader said he will discuss the situation with several diocesan councils, including a special meeting of its finance council. If church representatives want the bishop to sell the home, Gregory said he will do so and move elsewhere.

The purchase of the sprawling home was part of a real estate deal made possible by money from Joseph Mitchell’s estate.

In his will, Mitchell requested that primary consideration be given to the Cathedral of Christ The King, where he worshipped. The cathedral received $7.5 million for its capital fund and spent roughly $1.9 million to buy the archbishop’s old home, according to tax records. Cathedral officials are planning to spend an additional $292,000 to expand Gregory’s old home so its priests can live there, freeing up space on the cathedral’s cramped campus.

After selling his home, Gregory needed a new residence.

The archbishop said that he made a mistake while designing a home with large meeting spaces and rooms for receptions and gatherings.

“What we didn’t stop to consider, and that oversight rests with me and me alone, was that the world and the Church have changed,” Gregory said.

He demolished the one-story home on Mitchell’s property, which was donated to the church, and replaced it with a Tudor-style mansion. In January, a group of local Catholics met with the archbishop and asked that he sell the large home and return to his old residence. They cited the example of Pope Francis, who turned down living quarters in a Vatican palace and drives a simple car.

“The example of the Holy Father, and the way people of every sector of our society have responded to his message of gentle joy and compassion without pretense, has set the bar for every Catholic and even for many who don’t share our communion,” Gregory said.

The Bishop Long scandal: From Atlanta to Philadelphia