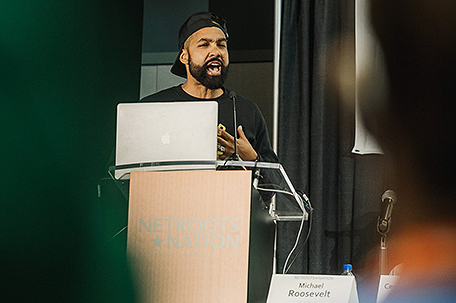 With the 2022 midterm elections coming up, last weekend’s Netroots Nation conference in Pittsburgh was a strategy session.

When the 2020 presidential election was called in favor of Democratic candidate Joe Biden, the call came from Independence Mall.

Pennsylvania’s voters put Biden over the Electoral College threshold to win the nomination.

But it wasn’t just any group of Pennsylvania voters, said Jasiri X, a political activist and founder of Pittsburgh’s 1 Hood Media.

It was work that continued at the Netroots Nation conference last weekend in Pittsburgh. This year’s annual gathering at the David L. Lawrence Conference Center brought progressive activists from around the country together to connect and strategize and enjoy the sights and sounds of the Steel City as the 2022 midterm elections approach.

The last time that Netroots Nation was held in person in 2019, the Pennsylvania Convention Center in Philadelphia was the setting and everyone was hearing from Democratic presidential candidates courting the progressive vote, while progressives themselves were discussing ways to organize on behalf of their principles.

While the stakes were pretty high then, such things as a fiercely conservative Supreme Court and attacks on not only the right to vote, but the systems that make it possible, brought a sense of urgency to the conference, said Eric Thut, executive director of Netroots Nation.

While it may have been a combination of COVID-influenced coincidence and a desire to return to a city that was popular with Netroots Nation members that brought the gathering back to Pennsylvania, it isn’t an accident, Thut said.

“There’s a lot of things that [determine where the conference meets], but we definitely look at the politics,” Thut admits. “And obviously, Pennsylvania was important politically.”

The Thursday night plenary session focused on how progressives can run the political table in Pennsylvania in November. In addition to Jasiri X, panelists included State Rep. Malcolm Kenyatta, Philadelphia City Councilmember Helen Gym, State Rep. Summer Lee, a Democratic Congressional candidate from the Pittsburgh area, and Pittsburgh’s new Mayor Ed Gainey. Everyone talked to the audience about ways to keep Pennsylvania in the “blue” column come November and how to make inroads locally.

Netroots Nation began as a meetup organized by the blogsite Daily Kos, whose founder Markos Moulitsas also spoke at the conference. It has since grown into the largest gathering of its type in the country.

The next Netroots Nation is scheduled for Chicago in 2023.