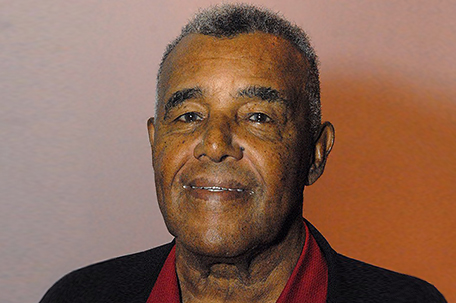 Dorrington signed with the New York Rangers in 1950, two years after Jackie Robinson broke the color barrier in baseball.

Although he never got called up to skate for the Rangers, Dorrington played for nearly a decade in the minors — first with the Atlantic City Sea Gulls, and later for the Philadelphia Ramblers. (He consequently sometimes got overshadowed by Willie O’Ree, who was the first African-American to play in the National Hockey League for the Boston Bruins.)

Dorrington told the New York Times in 1997 that he learned to skate when he was 3, and began dreaming of a professional hockey career “soon as I could figure out how to hold the stick.” He said he never experienced racism on the ice or in the locker room — but was barred from staying in the same hotels or eating in the same restaurants as his teammates when his teams traveled south to Maryland and Washington.

He was the Eastern Hockey League’s leading goal scorer from 1954 to 1956, according to the organization.

Sean McKoy is a television producer from Philadelphia who interviewed Dorrington and O’Ree for documentary projects.

“These are the first African-Americans players to ever play in a sport that, of course even now, is predominantly White. They’re like the Jackie Robinsons of hockey,” McKoy said. “So they were trailblazers in a way that changed the sport forever. They paved the way for Wayne Simmonds, who is such a great guy for the Flyers.”

But his passion for the sport continued, and inspired him and his wife Dorothie to start the Art Dorrington Foundation in Atlantic City to teach low-income kids hockey. Their motto: “On the Ice, Off the Street.” Besides free gear and instruction, the foundation focused on life skills and education.

“He said, ‘I don’t want to just teach the kids hockey so they can have some good times. I want to make sure they do well in school so they continue their education.’ So the price to be part of the Art Dorrington Foundation hockey league program was to do homework in order to earn your ice time. They had a very successful program,” said Don Guardian, who was Atlantic City’s mayor until Frank Gilliam was sworn in Monday.

Dorrington was so special to the city that Guardian declared an “Art Dorrington Day” in 2015. Three years earlier, city officials named the ice rink in Boardwalk Hall after him.

“There’s got to be at least two generations of Atlantic City residents who have fond, fond memories of Art being a wonderful coach and a mentor to them,” Guardian said.

A Nova Scotia native, Dorrington made Atlantic City his home for decades, becoming a familiar figure everywhere from the municipal buildings to the athletic facilities.

He worked for the Atlantic County Sheriff’s Department and served as Atlantic City’s softball commissioner and an umpire for more than 30 years.

His daughter Judah Dorrington announced his death Saturday on Facebook, saying he died peacefully at home on Friday, surrounded by relatives.

He was 87. A funeral service is set for 11 a.m. Friday at the Second Baptist Church in Atlantic City.

Even in Dorrington’s final days, hockey — and helping kids — were never far from his mind.

Guardian said he last saw Dorrington about a month ago, when he visited him in a nursing home. Dorrington was sick and bedridden.

But all he wanted to talk about was his foundation, Guardian said.

“As we talked, he said, ‘because of my declining health this year, I wasn’t able to do the grants and fundraising, and I’m afraid we’re not going to be able to do the program this year, unless we find about $20,000 to $25,000.’ It was Art’s dying man’s wish that the program get funding for another year.”

Guardian, at the time, was looking for worthy programs to spend the rest of an endowment fund given to the city by MGM. So Guardian gave $25,000 to Dorrington’s foundation to ensure its survival.

“How could I not do this for this guy who did so much for us?” Guardian said.