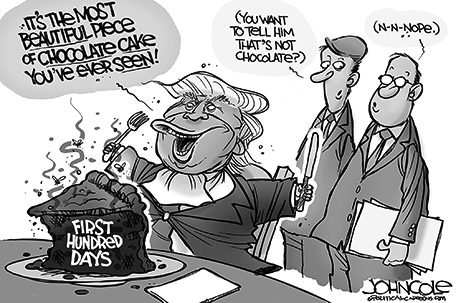 By Calvin Woodward and Jim Drinkard

WASHINGTON — One of the most consistent features of President Donald Trump’s public statements is his drive to take credit and assign blame. It’s a tendency that consistently lands him in trouble with history, either recent or long ago, and has been on display as he approaches his 100th day in office.

Over the past week, the president claimed unprecedented achievement as he tried to shape perceptions of his 100-day legacy. He then pooh-poohed that benchmark as time ran short for him to get big things done. He disparaged the record of his predecessor, specifically on fighting the violent MS-13 gang, and Trump addressed his abandonment of a central campaign promise on China by denying he’d changed his mind.

A look at some of his statements:

TRUMP: “No matter how much I accomplish during the ridiculous standard of the first 100 days, & it has been a lot (including S.C.), media will kill!” — Tweet on Friday, singling out his successful Supreme Court nomination.

THE FACTS: The president may consider the 100-day standard “ridiculous” now, but he completely bought into it during his presidential campaign.

In an appearance at Gettysburg, Pennsylvania, on Oct. 22, he issued a “contract “ with voters that he called a “100-day action plan.” In it, he promised 18 steps within 100 days to overhaul the government, protect workers and improve national security, and 10 legislative initiatives.

“On November 8th, Americans will be voting for this 100-day plan to restore prosperity to our economy, security to our communities and honesty to our government,” the “contract” says, with his signature. “This is my pledge to you.” His performance on them is mixed .

TRUMP: “No administration has accomplished more in the first 90 days.” — Tuesday at the Kenosha, Wisconsin, headquarters of Snp-on tools.

THE FACTS: Trump’s legislative victories are minor, surpassed by those of a variety of high achievers in the White House. The concept of a president’s first 100 days (a benchmark Trump reaches in a week) started with President Franklin Roosevelt, because he got so much done.

Taking office in the Great Depression, Roosevelt quickly declared a banking holiday to quiet panic, called a special session of Congress and won passage of emergency legislation to stabilize the banking system. He came forward with a flurry of consequential legislation that set the pillars of the New Deal in place within his first 100 days, “the most concentrated period of U.S. reform in U.S. history,” say Alan Brinkley and Davis Dyer in “The Reader’s Companion to the American Presidency.” No fewer than 14 historic laws were enacted in that time.

Trump’s big agenda items, like his promised tax overhaul and infrastructure plan, have yet to reach Congress. His attempt to secure the borders from people from terrorism-prone regions is so far blocked by courts. His first attempt to repeal and replace President Barack Obama’s health care law failed in Congress.

Trump needn’t look as far back as FDR to see a president who got off to a fast start. Obama signed a $787 billion stimulus package into law in his first month, while also achieving laws expanding health care for children and advancing equal pay for women in that time.

Like Roosevelt, Obama came to office in an economic crisis, the worst since the Depression. Lawmakers from both parties were inclined to act quickly and did, even as they fought over the details of the big stimulus package that defined Obama’s early days.

President Ronald Reagan’s 100 days were considered the hardest-driving since FDR’s time, even though Reagan was shot March 30, 1981. He presented Congress with the most consequential tax, spending and government-overhaul plan it had seen in decades, a comprehensive package that exceeds in scope anything Trump has brought forward, including his first run at health care. Congressional approval came later.

TRUMP:  “The weak illegal immigration policies of the Obama Admin. allowed bad MS 13 gangs to form in cities across U.S. We are removing them fast!”

THE FACTS: Obama can’t be blamed for allowing MS-13 to form as a nationwide gang because that happened long before he became president.

A fact sheet from Trump’s own Justice Department states that the gang, which originated in the 1980s in the Central American community in Los Angeles, “quickly spread to states across the country.”

The department indirectly credits the Obama administration, in its early years, with helping to rein in the group: “Through the combined efforts of federal, state, and local law enforcement, great progress was made diminishing or severely (disrupting) the gang within certain targeted areas of the U.S. by 2009 and 2010.”

The U.S. carried out record deportations during the Obama administration and, on MS-13 specifically, took the unprecedented action of labelling the street gang a transnational criminal organization and announcing a freeze on its U.S. assets.

Such actions were not enough to bring down the group and the Trump administration says it will do more.

According to an FBI assessment from January 2008, before Obama took office, the gang was operating in at least 42 states and the District of Columbia, roughly the same number of states estimated now. The assessment said the group was made up of Salvadoran nationals and first-generation Salvadoran-Americans. The FBI at the time did not provide a breakdown of how many of the gang’s members were immigrants or U.S. citizens.

TRUMP: “I didn’t soften my stance” on China. “Nobody’s ever seen such a positive response on our behalf from China, and then the fake media goes ‘Donald Trump has changed his stance on China.’ I haven’t changed my stance. China’s trying to help us.” — Fox interview.

THE FACTS: It’s hard to imagine a clearer switch in positions than the president’s abandonment of his campaign pledge to declare China a currency manipulator, a move that would have set the stage for trade penalties. China had once devalued its currency to make its exports artificially cheaper, crowding out other countries’ products, but in recent years has let market forces do more to shape currency exchange rates. Even as Trump railed against Chinese currency manipulation in the presidential campaign, there already were signs that China was taking steps to keep the value of the yuan from sinking further against the dollar.

Trump didn’t let go of his accusation easily. As recently as April 2, he told The Financial Times that the Chinese are “world champions” of currency manipulation.

TRUMP, speaking about fellow NATO members, says he wants to “make sure these countries start paying their bills a little bit more. You know, they’re way, way behind.” — Remarks in Kenosha.

THE FACTS: That’s an oversimplification of NATO financial obligations, and one Trump has made repeatedly. NATO members are not in arrears on payments. They committed in 2014 to ensuring that by 2024, they would be spending 2 percent of their gross domestic product on their military budgets. Most NATO countries are spending less than that now, and Washington is putting pressure on them to do more.

In any event, the commitment is for these nations to spend more on their own military capabilities, which would strengthen the alliance, not to hand over money.