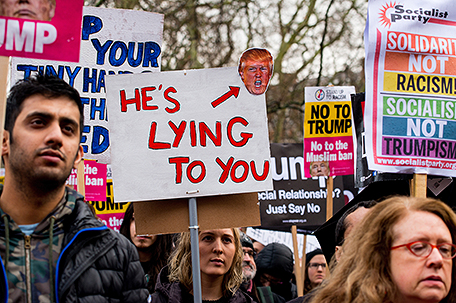 WASHINGTON — President Donald Trump appears to be oblivious to the threat of white nationalism.

But data — including from his own Justice Department — point to rising hate group activity while he’s been in office.

Trump also asserts the U.S. is No. 1 in the world on the environment and suggests that Toyota’s announcement of U.S. job creation is due to his revised trade agreement with leaders from Mexico and Canada. Both claims are problematic. According to several studies, the U.S. lags several countries on air quality. And Trump’s proposed United States-Mexico-Canada Agreement has yet to take effect and faces uncertain prospects in Congress.

The misstatements came in a week of distorted truth on several fronts. On one, Beto O’Rourke opened his Democratic presidential campaign with a call to action on global warming that misrepresented the science.

A look at some of the claims:

TRUMP, when asked if he views white nationalism as a rising threat worldwide: “I don’t really. I think it’s a small group of people that have very, very serious problems. I guess if you look at what happened in New Zealand, perhaps that’s the case. I don’t know enough about it yet. They’re just learning about the person and the people involved. But it’s certainly a terrible thing.” — remarks Friday in Oval Office.

THE FACTS: Both data and many experts who track violent extremists point to White nationalism as a rising threat in the U.S. and abroad.

According to data released this month by the New York-based Anti-Defamation League, for instance, white supremacist propaganda efforts nearly tripled last year from 2017. Reports of the propaganda — which can include fliers, stickers, banners and posters that promote hateful ideology — rose 182 percent to 1,187 cases. That’s up from the 421 reported in 2017.

The Anti-Defamation League in January said domestic extremists killed at least 50 people in the U.S. in 2018, up from 37 in 2017, and noted that “white supremacists were responsible for the great majority of the killings, which is typically the case.”

Separately, the Southern Poverty Law Center reported the U.S. had more hate groups last year than at any point in at least the past two decades. The organization, which tracks White supremacists and other far-right extremists, said the 1,020 groups it counted in 2018 amounted to the highest number since the center broadened its survey of such groups in the 1990s.

The center said it was the fourth straight year of hate group growth, representing a 30 percent increase roughly coinciding with Trump’s campaign and presidency. That came following three straight years of decline near the end of the Obama administration.

And the Justice Department reported in November that hate crimes across the U.S. spiked 17 percent in 2017 — marking a rise for the third straight year. There were 7,175 reported hate crimes that year, up from 6,121 in 2016, according to the FBI report. More than half of the crimes were motivated by bias against a person’s race or ethnicity. Anti-Semitic hate crimes increased 37 percent.

Among the episodes in the last few years: a white nationalist rally in Charlottesville, Virginia, in 2017 after which Trump blamed “both sides” for violence, and last October’s shooting at the Tree of Life Synagogue in Pittsburgh in which the gunman accused of killing 11 people allegedly drew inspiration from white nationalism. Authorities last month arrested a Coast Guard lieutenant, an alleged white supremacist who appeared interested in attacking top Democrats and network TV journalists.

BETO O’ROURKE, on global warming: “This is our final chance. The scientists are absolutely unanimous on this. That we have no more than 12 years to take incredibly bold action on this crisis.” — remarks in Keokuk, Iowa, on Thursday.

THE FACTS: There is no scientific consensus, much less unanimity, that the planet only has 12 years to fix the problem.

A report by the United Nations Intergovernmental Panel on Climate Change, drawn from the work of hundreds of scientists, uses 2030 as a prominent benchmark because signatories to the Paris agreement have pledged emission cuts by then. But it’s not a last chance, hard deadline for action, as it has been interpreted in some quarters.

“Glad to clear this up,” James Skea, co-chairman of the report and professor of sustainable energy at Imperial College London, told The Associated Press. The panel “did not say we have 12 years left to save the world.”

He added: “The hotter it gets, the worse it gets, but there is no cliff edge.”

“This has been a persistent source of confusion,” agreed Kristie L. Ebi, director of the Center for Health and the Global Environment at the University of Washington in Seattle. “The report never said we only have 12 years left.”

The report forecasts that global warming is likely to increase by 0.5 degrees Celsius or 0.9 degrees Fahrenheit between 2030 and 2052 “if it continues to increase at the current rate.” The climate has already warmed by 1 degree C or 1.8 degrees F since the pre-Industrial Age.

Even holding warming to that level brings harmful effects to the environment, the report said, but the impact increases greatly if the increase in the global average temperature approaches 2 degrees C or 3.6 degrees F.

“The earth does not reach a cliff at 2030 or 2052,” Ebi told AP. But “keep adding greenhouse gases to the atmosphere and temperatures will continue to rise.”

As much as climate scientists see the necessity for broad and immediate action to address global warming, they do not agree on an imminent point of no return.

Cornell University climate scientist Natalie M. Mahowald told the AP that a 12-year time frame is a “robust number for trying to cut emissions” and to keep the increase in warming under current levels.

But she said sketching out unduly dire consequences is not “helpful to solving the problem.”

TRUMP: “Since 1976, presidents have declared 59 national emergencies. … The only emergency Congress voted to revoke was the one to protect our own country. So, think of that: With all of the national emergencies, this was the one they don’t want to do. And this is the one, perhaps, they should most do.” — Oval Office remarks Friday after vetoing the congressional resolution seeking to strike down his declaration of a border emergency.

THE FACTS: His declaration was not the only one designed to protect the country.

President Barack Obama declared an emergency in 2009 to protect the nation from the swine flu, which had killed more than 1,000 people and spread to 46 states before he took that step. The H1N1 flu strain was linked to more than 274,000 hospitalizations and 12,000 deaths in the U.S. between April 2009 and April 2010.

It enabled the activation of emergency plans, such as moving emergency rooms offsite to keep those infected with the virus away from other emergency room patients, and it had Republican support. Unlike Trump’s order, it was not designed to free up money that Congress had already refused to spend.

Most national emergencies declared by presidents have been narrowly drawn, designed to protect U.S. interests in foreign countries, often in response to crises breaking abroad.

THE FACTS: One major record has been broken — the number of migrant families arrested for crossing into the U.S. illegally. Other records have not.

More than 76,000 migrants crossed the U.S.-Mexico border last month, more than double the number from the same period last year. Most were families coming in increasingly large groups.

Overall numbers of Border Patrol arrests were the highest in 12 years, but not the highest ever.

The annual numbers are far from a record. About 400,000 people were arrested for crossing the border illegally in the last budget year, just one-quarter of the 1.6 million in 2000. That is the record.