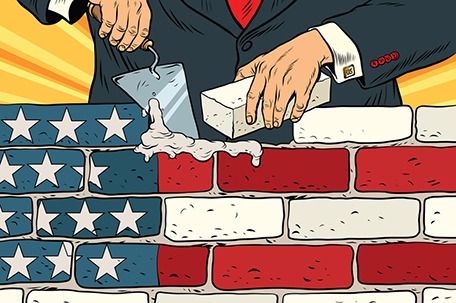 By Calvin Woodward and Hope Yen

WASHINGTON — Playing migrants for laughs in a speech to lobbyists and donors, President Donald Trump characterized people trying to get into the U.S. as a horde of beefy men who fake hard-luck stories, so softies in the immigration system will let them in.

His shtick caused plenty of amusement at the Republican Jewish Coalition event last Saturday, but it was a far cry from the reality of the masses at the border.

The speech capped a week of unreal political rhetoric as Trump retreated on two broad fronts, the border and health care, and offered tortured explanations for doing so. He also got his family history wrong and drew a link between wind power and cancer that has not been proved.

Here’s a look back:

TRUMP, describing asylum seekers as “people that look like they should be fighting for the UFC (Ultimate Fighting Championship). They read a little page given by lawyers that are all over the place,” coaching them to say “I am very fearful for my life. I am very worried that I will be accosted if I’m sent back home.” Trump then mimics U.S. officials: “Oh, give him asylum. He’s afraid. He’s afraid.” And he adds: “We don’t love the fact that he’s got tattoos on his face. That’s not a good sign.” — speech Saturday to the lobbying group.

THE FACTS: Figures from his own administration tell a different story than Trump’s mocking tale. Those coming are increasingly families and children. Among them are thousands who get a chance for a life in America because they make a compelling case that they risk persecution in their home countries.

Last month, Homeland Security’s immigration statistics office released its latest annual report on the flow of asylum seekers and refugees, covering 2017. Among those who came from Guatemala, El Salvador and Honduras and applied for asylum at the border, 56 percent were unaccompanied children. The percentage was the same the year before and higher in 2015.

Altogether, Homeland Security granted the asylum applications of more than 26,500 people in 2017. Almost one-third were children. Nearly half were women. Close to two-thirds were married.

Additionally, the Justice Department granted asylum to more than 10,500 people who were already in the country and made their case for refuge in their deportation hearings.

TRUMP: “If they put one foot on our territory, if they start climbing a fence and they’re on the Mexico side, welcome to the United States. Think of it. It’s the craziest thing.” — speech Saturday.

THE FACTS: It’s not that simple. What is lost in Trump’s rhetoric is that it is legal to come to the border and ask for asylum. As for those who sneak illegally into the U.S. and get caught, they, too, are entitled to apply for asylum.

As the Homeland Security report states: “Generally, any foreign national present in the United States or arriving at a POE (port of entry) may seek asylum regardless of immigration status.”

Whether they ask at the border or after sneaking into the U.S., most don’t get it.

TRUMP, on why he is pulling back on sealing the U.S.-Mexico border: “Because Mexico has been absolutely terrific for the last four days. They’re apprehending everybody. Yesterday they apprehended 1,400 people. The day before was 1,000. And if they apprehend people at their southern border where they don’t have to walk through, that’s a big home run. We can handle it from there. It’s really good.” — remarks to reporters Friday.

TRUMP: “Before that they never did anything.” — remarks to reporters Thursday.

THE FACTS: Trump is describing a Mexican crackdown on Central American migrants that has not materialized. He’s also wrong in saying that Mexico did nothing about the problem until he threatened to close the border.

Mexico markedly tightened migration controls during the Obama administration. Mexico also detained more than 30,000 foreigners in the first three months of this year, before Trump accused Mexican officials of doing “NOTHING.”

Mexico reports that its interception and detention of migrants from the south are “about average” in recent months. Over the first three days of April, it apprehended 1,259 foreigners — not 1,000 or more a day, as Trump claimed.

“There is no very substantive change,” said Mexico’s foreign secretary, Marcelo Ebrard. “I don’t know what (Trump) was referring to.”

Ebrard said: “What Mexico is doing as far as the review of the southern border — well, it’s the same thing it has been doing.”

THE FACTS: There’s no Judge Flores involved. Jenny Flores was 15-year-old native of El Salvador who was held in what her advocates said were substandard conditions in the 1980s, contending she was strip-searched in custody and housed with male adults. They launched a class-action lawsuit on behalf of migrant children in the country illegally. Her mother was a housekeeper in the U.S. who feared deportation if she picked up her daughter.

The case worked its way to the Supreme Court, which sided with the government and against the girl’s advocates. But the case gave rise to an agreement in 1997 setting conditions for the detention of migrant children and the codifying of those conditions in law a decade later. It generally bars the government from keeping children in immigration detention for more than 20 days and guides how they are to be treated.

TRUMP: “This will be a great campaign issue. I never asked Mitch McConnell for a vote before the Election as has been incorrectly reported (as usual) in the @nytimes, but only after the Election when we take back the House etc.” — tweet Wednesday.

THE FACTS: That’s misleading at best.

A week earlier, Trump stirred expectations of an ambitious health care effort when he said that if the Supreme Court strikes down “Obamacare,” “we will have a plan that’s far better.” He promised “the Republican Party will become the party of great health care.”

But Trump soon found that the party in Congress had no appetite for yet another attempt to replace President Barack Obama’s health law in the near future — nor does it have a plan.

“I made it clear to him that we were not going to be doing that in the Senate,” Senate Majority Leader Mitch McConnell, R-Ky., told reporters Tuesday, describing their conversation a day earlier. “He did say, as he later tweeted, that he accepted that and that he would be developing a plan that he would take to the American people during the 2020 campaign.”

So Trump backed down and postponed any replacement until after an election more than 18 months away.

McConnell explained to Trump that senators are open to tackling specific aspects of health care — namely, trying to lower prescription drug prices, according to a person who spoke on condition of anonymity to discuss Monday’s private call between the two. But Trump’s promised big, new health care bill wasn’t going happen with Democrats running the House.

Trump told McConnell he “accepted” the situation and “would be developing a plan that he would take to the American people during the 2020 campaign,” according to that person. That night, Trump tweeted as much.

THE FACTS: Trump and his chief of staff’s sweeping statements about the GOP commitment to protect people with pre-existing medical conditions are misleading. The Republican health insurance proposals would not have protected those patients as broadly as the Obama-era law and could have led to significantly higher rates or gaps in coverage for people with chronic illnesses.

The Obama health law requires insurers to take all applicants, regardless of medical history, and patients with health problems pay the same standard premiums as healthy ones. It also requires standard benefits such as pregnancy, maternity and newborn care and mental health treatment. The trade-off was that the law also mandated that everyone have insurance, including healthy people, whose premiums helped insurers cover the costs of the very sick.

The GOP health overhaul plans in Congress eliminated the mandate that everyone have insurance and sought to protect people with pre-existing conditions to a degree. But the Republican legislation would have given states leeway to vary the premiums that insurers charge based on health and other factors. That might make coverage unaffordable for people with serious or pre-existing health conditions.

For instance, the Republican plans would have allowed insurers to charge older people at a 5-to-1 ratio compared with young people, higher than the law’s 3-to-1 ratio, and given states authority to allow insurers to use health status as a factor in setting premiums for people who have had a break in coverage and are trying to get a new individual policy.

The nonpartisan Congressional Budget Office found the GOP plans over time would raise premiums for people with health problems because healthy people would be more likely to take their chances going uninsured.