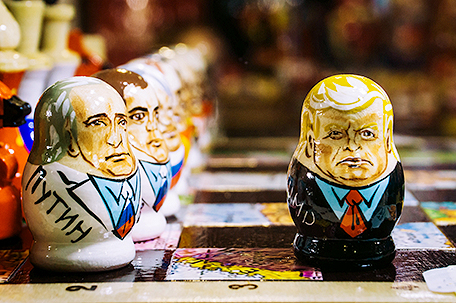 WASHINGTON — President Donald Trump on Sunday celebrated a “total exoneration” that special counsel Robert Mueller explicitly did not provide in his report on the Russia investigation.

TRUMP: “No Collusion, No Obstruction, Complete and Total EXONERATION.” — tweet Sunday after Barr gave Congress his summary of Mueller’s findings.

TRUMP: “There was no obstruction, and none what so ever, and it was a complete and total exoneration.” — remarks to reporters Sunday after Barry’s summary came out.

SARAH SANDERS, White House press secretary: “The Special Counsel did not find any collusion and did not find any obstruction. AG Barr and DAG (Deputy Attorney general Rod) Rosenstein further determined there was no obstruction. The findings of the Department of Justice are a total and complete exoneration.” — tweet Sunday.

THE FACTS: It was not a total vindication. Mueller’s exact words in the report, as quoted by the attorney general, say otherwise: “While this report does not conclude that the President committed a crime, it also does not exonerate him.”

The summary by Barr notes Mueller did not “draw a conclusion — one way or the other — as to whether the examined conduct constituted obstruction,” but rather set out evidence for both sides, leaving the question unanswered. Barr wrote in the summary that ultimately he decided as attorney general that the evidence developed by Mueller was “not sufficient” to establish, for the purposes of prosecution, that Trump committed obstruction of justice

Barr’s summary also notes that Mueller did not find that the Trump campaign conspired or coordinated with Russia. To prove a crime, Mueller must generally meet a standard of proving an offense beyond a reasonable doubt. The summary did not clear the president of improper behavior regarding Russia but did not establish that “he was involved in an underlying crime related to Russian election interference,” Mueller said in a passage from the report quoted by Barr.

The four-page summary signed by Barr gave the bottom line only as he and Rosenstein saw it. Mueller’s detailed findings remain confidential at least for now.