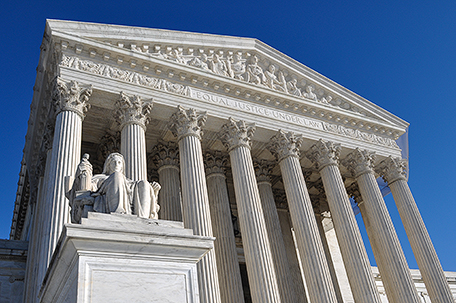 The Supreme Court heard two high-profile cases last September on election financing and affirmative action. We look at Schuette v. Coalition to Defend Affirmative Action, a significant decision that could be announced soon.

The Schuette case is about a challenge to Proposal 2, an amendment to the Michigan Constitution that voters approved in 2006 banning affirmative action in the state. The question in Schuette is whether the state of Michigan violated the 14th Amendment’s Equal Protection Clause when it amended its state constitution to ban affirmative action programs in its universities and in the public sector.

Voters in at least six other states have passed similar initiatives to Proposal 2 prohibiting affirmative action in their own states. Indeed, the Michigan initiative copies nearly verbatim California’s Proposition 209, which the state’s voters adopted in 1996 to eliminate preferential admissions and hiring practices in California.

Last term, Justice Anthony Kennedy’s decision in Fisher sent the case back to the Fifth Circuit Court of Appeals, which the Supreme Court held had not properly applied the strict scrutiny standard of review to the University of Texas’s affirmative action program.

The Coalition to Defend Affirmative Action, a group supportive of the continued use of affirmative action programs in Michigan, contends that Proposal 2 violates the Equal Protection Clause of the United States Constitution. The Coalition maintains that Proposal 2 marks a major setback for civil rights in the United States by discriminating against minorities and inhibiting them from achieving equality in society, particularly within the context of higher education.

However, Michigan’s Attorney General, Bill Schuette, maintains that Proposition 2 does not run afoul of the Equal Protection Clause and that the voters within a state maintain the right to approve an initiative eliminating affirmative action within the state.

Schuette and other affirmative action opponents maintain that the 14th Amendment’s Equal Protection Clause bars the government from giving preferential treatment to any individuals—whether white or a minority—on the basis of race.

In an 8-7 decision, the Sixth Circuit Court of Appeals sitting en banc held that Proposal 2 denies members of minority races equal protection of the laws. The Sixth Circuit held that the initiative amounted to an unconstitutional restructure of the political process, reasoning that because Proposal 2 amended the Michigan constitution to eliminate the state’s racial preference programs, a separate constitutional amendment would be required to reinstate them, thereby amounting to an unfair burden on minorities.

In an interesting parallel to last term’s Fisher case, Justice Elena Kagan is recused in Schuette, having worked on the case in her former role as Solicitor. Justice Kagan’s recusal leaves open the possibility that the Court will divide 4-4 and thereby leave untouched the Sixth Circuit’s ruling finding the Michigan ban unconstitutional.