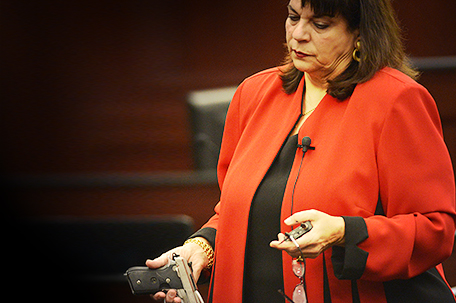 ABOVE PHOTO: State Attorney Angela Corey shows the 9mm handgun used by Michael Dunn to kill Jordan Davis as part of the trial proceedings in Jacksonville, Fla. Monday, Feb. 10, 2014. The prosecution has rested in the trial of Dunn who is charged with killing Davis following an argument over loud music outside a Jacksonville convenience store in 2012.   (AP Photo/The Florida Times-Union, Bob Mack, Pool)

“We intend to fully push for a new trial….Justice for Jordan Davis is as important as it is for any victim,” said Corey.

Dunn, 47, has been found guilty of three counts of attempted second degree murder and one count of hurling a deadly missile. A mistrial was declared on the first-degree murder charge in the shooting death of 17-year old Jordan Davis.

In essence, Dunn was found guilty of everything but murdering Jordan Davis.

Protesters have begun marching over to the prosecutor’s office and demanding Corey’s resignation for, what they feel, is her failure to get justice for Davis.

Corey was also the special prosecutor in the George Zimmerman murder trial.

Last year, Zimmerman was found not guilty of murder in the shooting death of 17-year-old Trayvon Martin.

Both Martin and Davis were killed when they were 17-years-old.

In Zimmerman’s case, he could be heard on the 911 call saying that “these f***ing punks always get away” before Trayvon Martin was found dead in the wet grass of his father’s gated community.