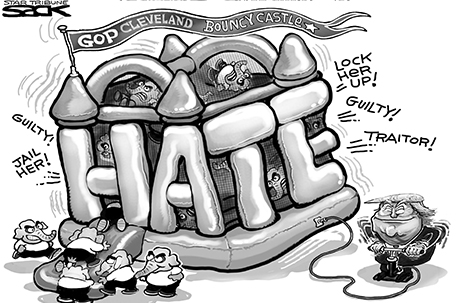 On Tuesday night, the marriage between businessman Donald Trump and the Republican Party became official.

For the last few months, people have been referring to businessman Donald Trump as the Republican Party’s presumptive nominee for president.

That label officially came off as delegates from around the country made Trump the Republican Party’s nominee for President, on the second night of the Republican National Convention at the Quicken Loans Arena in Cleveland. Trump’s vice presidential running mate, Indiana Gov. Mike Pence, was also officially made a part of the ticket.

Speaker of the House Paul Ryan began the process of the Roll Call of the States and by the end of it, Trump got most of the votes cast by the delegates from all 50 states and American territories. Trump’s son Donald Jr., himself a member of the New York delegation, ending the festivities by casting the deciding vote for his father’s nomination.

The newly minted Presidential nominee spoke to his enthusiastic troops, Via video from his offices in Trump Tower, and thanked them for their support. He will formally accept the nomination on Thursday evening.

“Now begins the process of sending Trump/Pence to the White House and heading presumptive Democratic Presidential nominee Hillary Clinton off at the pass,” Ryan said.

“We offer a better way with plans that actually work,” he continued. “Only with Donald Trump and Mike Pence can we have that better way.”

That said, it wasn’t totally smooth sailing. Many of the so-called “#NeverTrump” delegates from places like Colorado and the District of Columbia cast their votes for others, such as Ohio Gov. John Kasich or Florida Sen. Marco Rubio, however, under the rules of the RNC, their protest votes turned into votes for Trump.

Many of these delegates left shortly after it was announced that Trump was now the standard bearer. While it looks like unity can’t be assumed here, Rob Gleason, chair of Pennsylvania’s Republican Party, believes that victory — at least in Pennsylvania– is at hand.

“The momentum is building and I’m feeling pretty positive,” Gleason said at a press luncheon he held with the press covering the Pennsylvania Delegation on Tuesday. “I believe that Donald Trump will win 60 counties in Pennsylvania. All of the signs look good for a win.”

But will Trump’s presence make minority outreach, something the GOP has had a problem with on both a local and national level, harder? Gleason doesn’t think so.

“I don’t think it’ll complicate things,” he said. “Minorities want jobs, and Donald Trump will get them.”

But those who stuck it out got the kind of red meat that political conventions are best known for. For example, Christie, who was passed over as Trump’s running mate despite being a staunch supporter, used his time to take Clinton to “trial” for a variety of alleged offenses as an audience cheered, “Lock her up!”

But Carson was not to be outdone. He told the audience that Clinton shouldn’t be president due to something more insidious.

Citing a book from Saul Alinsky– a Democratic socialist writer who talked with Clinton when she was in college and whose writings President Barack Obama had also read– Carson told his audience that Alinsky’s acknowledgement of Lucifer as a revolutionary in his book should make Clinton automatically suspect.

“Are we willing to elect as president someone who has as their role model somebody who acknowledges Lucifer?” Carson asked. “If we continue to allow (secular progressives) to take God out of our lives, God will remove himself from us. We will not be blessed and our nation will go down the tubes.”

Those who stuck around for the speeches also heard from two of Trump’s children: Donald Jr. and Tiffany. Trump’s praises were also sung by Dana White, president of the UFC Ultimate Fighting Championship and Chris Cox, executive director of the NRA’s Institute for Legislative Action.