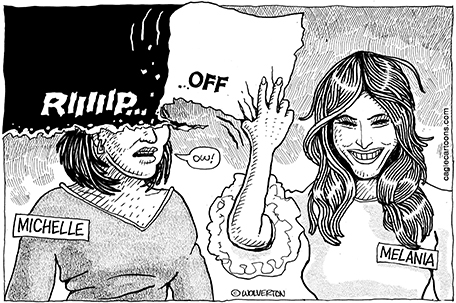 On the first day of the Republican National Convention, there were policy debates, protests and even a little plagiarism.

That the first night of the Republican National Convention ended with a discussion of plagiarism seemed kind of fitting.

The first nighttime session of the gathering, which will be held at Quicken Loans Arena in Cleveland until Thursday, talked so much about many of the same things that it was easy to get mixed up.

Donald Trump’s coming-out party as the new titular head of the Republican Party had people from all walks of life ranging from actors we hadn’t heard of in a while (“Joanie and Chachi’s” Scott Baio and Antonio Sabato Jr. of “General Hospital”) reality television stars (“Duck Dynasty’s” Willie Robertson) to a legislator best known for campaign commercials that discussed hog castration (Iowa Sen. Joni Ernst) all taking to the stage to sing his praises and proclaim that he will indeed “Make America Great Again” if elected President.

But while Trump’s wife, Melania, took the stage and tried to humanize her husband in her convention speech, the attempt fell short when it was discovered that many of the words she used were not her own.

In fact, they belonged to the wife of the man that her husband had been demonizing for almost eight years, President Barack Obama.

A laid-off journalist in California discovered the similarites between the two speeches and put the word out on Twitter, inspiring the hashtag #MelaniaTrumpFamousQuotes and a takedown by actor/activist Jesse Williams.

Republican officials and members of the Trump Campaign came to Melania’s defense, making a bad thing worse in some cases.

“She gave a good speech,” Gleason said. “And she got criticized for plagiarism. I don’t know who looked at the speech, but it came from her heart. There are only so many ways that you can say good things about someone. But this is just noise. People don’t care about this. They care about jobs.”

Trump’s campaign manager Paul Manafort took to media outlets like CNN and held a press conference to place the blame at the feet of another person: presumptive Democratic Presidential nominee Hillary Clinton.

“This is once again an example of when a woman threatens Hillary Clinton, she seeks out to demean her and take her down,” he said. “It’s not going to work. When Hillary Clinton is threatened by a female, the first thing she does is try to destroy the person.”

That was actually not the worst part of the day for the Republicans. That came when delegations involved in the #NeverTrump movement tried to get a rule change that would allow delegates to vote their conscience instead of for whom they’re pledged.

Party officials refused to let the motion come to the floor, leading to a shouting match that led to the evening session starting later than scheduled.

The first night of speeches from the Republicans focused on law and order and seemed to focus on a fear that has seemed to emanate from the delegates themselves and work it’s way out.

Many of the speakers played to that fear including the creators of the Bengazi-themed film 13 Hours and David Clarke, the Sheriff of Milwaukee. Clarke announced to the crowd that Brian Rice, the highest ranking Baltimore Police Officer tried in the death of Freddie Gray, had been acquitted in a non-jury trial.

The crowd, many sporting Blue Lives Matter buttons, erupted in applause. Earlier that day, Trump made the suggestion that the group Black Lives Matter should be the subject of a Justice Department investigation as a terrorist group.

A protest march down Euclid Avenue near Convention headquarters Quicken Loans Arena was peaceful and extremely well policed as officers from police departments around the country and the Secret Service surrounded the protestors on all sides with bicycles and on foot.

Among those marchers was a group from Trump’s home state of New York that carried signs reading “I ain’t voting until Black Lives Matter!”

One of the marchers, Shenisha Hunter of the Bronx, said the group came to Cleveland to let people know that a gun and a uniform makes you more accountable, not less.

“We’re out here because Black Lives do matter,” Hunter said. “We’re tired of being killed in our own country. We’re asking for peace.”

There has been no shortage of police officers in the streets of Cleveland. Officers from around the country, paired with the Cleveland Police Department and the Secret Service have had a visible presence on the streets near the Quicken Loans Arena.

On Sunday, reporters who planned on reporting on the protests in Cleveland’s Public Square were given flack jackets and training in how to use gas masks

For the first time in the organization’s history, Amnesty International has sent a dozen observers to monitor protests at both the RNC and next week’s Democratic National Convention in Philadelphia.

The campaign rhetoric made the move necessary, said Eric Ferrero, a spokesman for the organization.

“The rhetoric on both sides has been so virulent that we felt we had to protect the protesters,” he said.