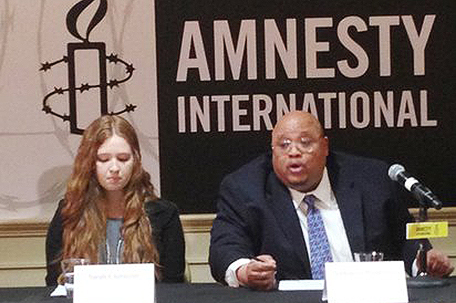 ABOVE PHOTO:  Sarah Clements, Jr. Newtown Action Alliance chairwoman and Nathaniel Pendleton, father of slain Chicago teen Hadiya Pendleton who was shot and killed in a Chicago park, both spoke about how gun violence affected their lives and led them into advocacy against it at the Amnesty International USA Human Rights Conference last week.  (Photo by Lee Edwards)

Gun violence was one of 10 issues addressed during the three day conference. LGBT rights, torture victims, and sex trafficking was also addressed.

“For our annual human rights conference, we like to go through communities and showcase through a human rights lens some of the issues that some communities are facing and Chicago is a really good place to do that,” said Cammie Croft, Deputy Executive Director of Amnesty International USA. “One issue in particular that we’re hoping to engage on to a greater degree is gun violence and talking about it in a human rights lens. Everyone has a right to security and a right to life that’s a missing part of the conversation right now.”

Steven Hawkins, Executive Director of Amnesty International USA; Nathaniel Pendleton, father of slain Chicago teen Hadiya Pendleton who was shot and killed in a Chicago park; and Sarah Clements, Jr. Newtown Action Alliance chairwoman; candidly expressed the affects of gun violence, based off of their personal experiences during a press conference.

“Gun violence [is] hurtful to me because I remember the first time I ever lost a young person who was a nephew of mine over thirty years ago,” said Hawkins. “We know the struggle is a long one.”

“I am here to honor my daughter,” said Nathaniel Pendleton. “I believe we are all in the same struggle, I believe we can help each other. Nothing unites communities like the threat of gun violence.”

As he spoke, Pendleton, offered the following gun violence statistics: In the United States, every day eight children are killed by bullets fired from a gun, 32 Americans are murdered by guns, and 140 are treated for gun assaults.

“When it happens to someone so close to you, that’s when it really wakes you up and shakes you,” Pendleton told the Chicago Citizen Newspaper. “Like I’ve said so many times before, don’t wait on it, don’t wait for it to come to your door step because you passed an opportunity.”

Sarah Clements, whose mother was a surviving teacher at Sandy Hook Elementary, the location of a tragic school shooting in 2013 that took the lives of 26 individuals, mainly children, also spoke.

“I’ve learned through my journey that many of the people affected by gun violence walk the same walk,” said Clements. “The time was yesterday, the time was last year, the year before that…we can’t wait for the voice of a loved one to be lost.”