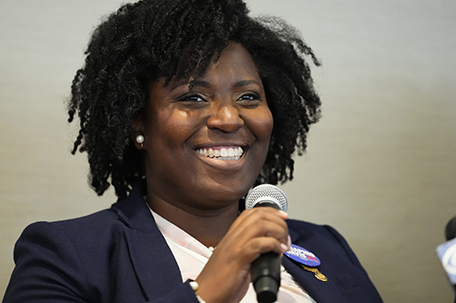 ABOVE PHOTO: Pennsylvania House Democratic Leader Joanna McClinton, D-Philadelphia, speaks in Philadelphia, Monday, Nov. 7, 2022. Democrats in the Pennsylvania House are moving to control the chamber after they barely won back enough seats in November but one of their incumbents died and two others won higher office. Shortly after McClinton was sworn in on the House floor on Wednesday, Dec. 7, 2022 she scheduled special elections for Feb. 7 for all three seats. (AP Photo/Matt Rourke, File)

HARRISBURG, Pa. — Pennsylvania’s statewide elections agency said in a court filing last Friday that it is moving ahead with plans for special elections to fill three state House vacancies in early February unless a court orders otherwise.

Control of the House hangs in the balance after Democrats netted 12 seats in the November election, enough for a one-seat majority. But one member died in the month before he was reelected, and two other reelected House Democrats resigned earlier this month ahead of being sworn into Congress and as lieutenant governor.

The Department of State’s new filing argues that Cutler failed to also sue his Democratic counterpart as floor leader, Rep. Joanna McClinton of Philadelphia, and that his dispute is with her, not with Chapman or her department. It also claims his effort on Nov. 30 to schedule one of the three vacancies for Feb. 7 was made too early, as the vacancy did not occur until the new two-year legislative session began on Dec. 1.

“To enjoin the special elections to fill vacancies in the House of Representatives would only create harm — wasting resources that have already been deployed to prepare for special elections on (Feb. 7), delaying those elections, and forcing Pennsylvania citizens to go even longer without the benefit of elected representation in their legislature,” wrote lawyers for the department and Chapman, who was appointed by Democratic Gov. Tom Wolf.

A status conference in the case is scheduled for next week.

Allegheny County government spokesperson Amie Downs said in an email Friday that election officials there are “awaiting court action” and in the meantime “identifying polling places, poll workers and doing other preparation and administrative work in advance of any election.”

McClinton claimed the mantle of the House’s presiding officer on Dec. 7, scheduling all three special elections for Feb. 7.

Cutler sued to stop the Feb. 7 votes on Dec. 9. On Thursday, he submitted paperwork seeking to hold two of the special elections in May, potentially retaining majority status for his party for six months after voters put Democrats in charge.

The Department of State in its filing Friday said it was “following the first facially valid writs received,” that is, McClinton’s writs of election, “unless this court instructs otherwise.”

Rep. Tony DeLuca, 85, died of cancer in October. His fellow Allegheny County Democratic state representatives. Austin Davis and Summer Lee, were simultaneously reelected on Nov. 8 to the House and to the higher offices of lieutenant governor and the U.S. House.

Representatives will elect a new speaker — the job Cutler had until Nov. 30, and which he says he no longer wants — on Jan. 3, swearing-in day. In the House, the majority party wields the power to control the voting schedule and run committees.