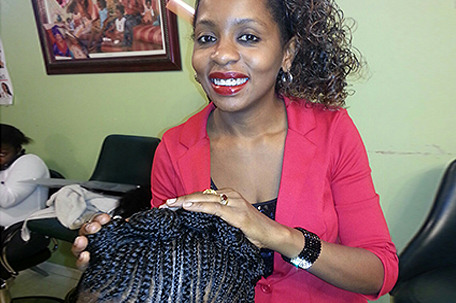 ABOVE PHOTO:  Kine Gueye, 39, owner of Kine Hair Braiding in Louisville, testified against the licensing of braiders in Kentucky.  (Photo: Babacar Sambe/Sambe Photography)

Kune Gueye came from Senegal to Nashville for a better life, but she had to overcome yards of red tape to earn her American dream.

To make a living, she turned to a skill she had honed over years of practice in her homeland – braiding hair. With a strong back and a talent for creating beautiful styles, combs and hair oils, Gueye began braiding at her Louisville, Kentucky, home — frequently working 12-hour days. Within weeks, she was able to pay her bills and send money to her family back home.

Years later, Gueye moved into a shop. She was married and had three children by then and wanted to expand. She was working in her salon — Kine Hair Braiding — one day when an inspector knocked.

“She told me she was from the state Board of Cosmetology… and that I was not allowed to do hair without a license,” Gueye said. “I told her I had been braiding for years, and I did not know you had to have a license.”

Gueye and other braiders in Kentucky won the right to braid without a license when Republican Governor Matt Bevin signed a law in April to exempt them from the cosmetology school and license requirement. Nebraska’s legislature passed a similar measure in March.

These victories aside, braiders in several states still battle regulations that require them to undergo up to 2,100 hours of instruction at cosmetology schools. These can cost more than $12,000, even though few such programs teach braiding.

It has helped braiders fight such rules in Arizona, Arkansas, California, Iowa, Minnesota, Mississippi, Missouri, Ohio, Texas, Utah and Washington, D.C., since its founding 25 years ago.

The institute’s first case, in 1992, was Taalib-Din Abdul Uqdah v. District of Columbia, in which Uqdah and his wife, Pamela Ferrell, the nationally-recognized owners of Cornrows & Co., successfully challenged Washington, D.C.’s cosmetology code, which was adopted in 1938. They claimed that they should have been exempt because they used no chemicals, dyes, sharp objects or other items that alter hair structure, as traditional stylists often do.

“This issue is about race, control, power and politics,” Uqdah said. “You and I wouldn’t be having this discussion, but for the fact that African-style braiders are making money hand over fist.”

A Kentucky cosmetologists’ trade association complained that the exemption legislation allows braiders to style hair without learning about disorders of the skin and scalp that can result from improper styling, according to news accounts.

Nina Stribling, 38, of Louisville, said she has been going to Gueye for 18 years for micro braids. Her daughter, 23, is also a long-time client. When the family moved to Kansas for four years because of her husband’s military service, Stribling drove 11 hours back to Louisville every six months to get her hair done.

She said she’s never had a problem with her hair or scalp and credited Gueye with taking special care after her hair grew fragile from the medicine she takes for lupus.

Stribling said she has become close with Gueye’s family, including Gueye’s mother, who moved to Louisville and started braiding a few years before her daughter did.

“She’s very good,” said Stribling. “There has never been an issue with my scalp being red or my hair being braided too tight. She knows what she’s doing and is very professional.”

Uqdah called licensing an infringement on the “economic liberty” of braiders, many of whom are black or African-born female immigrants whose opportunities for gainful employment would be limited but for braiding.

Avelar said there is a “consensus forming” among liberals, libertarians and conservatives that licensing requirements for workers need to be “pared back.”

Gueye, who testified before the legislature on the exemption, never wanted to speak for a cause.

She just wanted to disentangle braiders from impediments to their work.

“We are free now,” she said. “That’s what we wanted – to be free to just braid hair and help our families.”