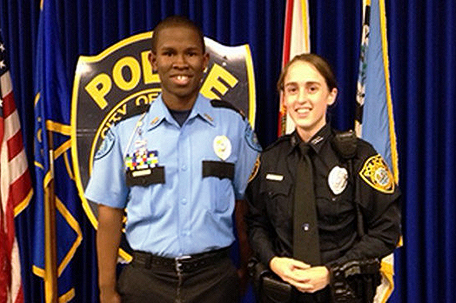 When he took over as police chief last year in the St. Louis suburb of Maryland Heights, it didn’t take Bill Carson long to see he had a serious diversity problem. Of the department’s 79 sworn officers, just one was black and one Hispanic.

Carson quickly issued a plan that included advertising in the local black newspaper, outreach to groups like the NAACP and participation in job fairs at area colleges with large minority student bodies.

Of 81 applicants in his first hiring round, only four were black or Hispanic — and the only one qualified chose to stay with the department where he was already working.

The Aug. 9 shooting of unarmed Michael Brown Jr., 18, by a white officer in nearby Ferguson has focused attention on the lack of diversity in many police departments across the country. One often-cited statistic: Ferguson is about two-thirds black, but only three of its 53 officers are African American.

But authorities say the reasons behind such numbers are many and often nuanced — and, as Carson learned, the remedies are not always quick or self-evident.

Experts say many departments limit their searches too close to home, often don’t recruit in the right places and set criteria that can disproportionately exclude groups they hope to attract. And across the U.S., police are not just struggling to attract blacks and Hispanics, but members of immigrant groups where distrust and fear of authority run deep.

“If you were taught from the time that you could speak, from the time that you could understand speech, that police are to be feared and that they’re part of an occupying force that is there to circumvent the democratic processes and to strip you of your rights, then it’s very difficult for that department to come into your neighborhood and tell you that they respect you and that you should join their team,” says Phillip Atiba Goff, co-founder and president of The Center for Policing Equity at the University of California, Los Angeles.

Ferguson Chief Tom Jackson says a few black officers left in recent years for higher-paying jobs, and that the city has tried to recruit more. Ferguson officials didn’t respond to requests from The Associated Press to elaborate on those efforts.

UCLA’s Goff says having a police force that mirrors the population is no “panacea.” Others agree.

Changes to make departments more diverse “have not curbed police violence in communities of color” or removed the special challenges of policing disadvantaged neighborhoods, wrote Malcolm D. Holmes and Brad W. Smith, co-authors of “Race and Police Brutality: Roots of an Urban Dilemma,” in a recent letter to the National Journal.

Part of the problem is policing “has never been made attractive for people of color,” says Malik Aziz, chairman and executive director of the National Black Police Association.

“When I got into the police department, I went to neighborhoods I had grown up in,” says Aziz, a deputy police chief in Dallas. “When people saw me, even people in my own family had very negative views of the police. I had to change this attitude.”

That’s why departments have to work even harder to entice qualified minorities, says Terrence Green, who was the only black officer when he became police chief in Lexington, South Carolina, eight years ago. African-Americans now comprise about 14 percent of the 50-person force — slightly higher than their representation in the city’s population.

“You’ve got to go out and fish for those people,” says Green, who found little interest among students in historically black colleges or schools that offered criminal justice degrees.

The Charlotte-Mecklenburg police department in North Carolina has stepped up its minority recruitment in recent years, reaching out as far as Puerto Rico. Three officers there were hired and a fourth will begin in October, says Capt. Stella Patterson, the department’s recruitment director.

Since 2012, the department has hired 25 Hispanic officers, including 10 women. It also offers a 5 percent pay increase to officers who speak Spanish, Laotian or Vietnamese. And it has tried to attract more black candidates, sending recruiters to historically black colleges.

Many communities go to great lengths to serve immigrant minorities.

In Minneapolis, the police department has about a half-dozen east African officers to work with the city’s large Somali community.

“They are among our best recruiting tools,” says spokesman John Elder. “These are people respected in the community.”

“He’s receptive and he wants to do what’s good and better for that department,” says Alexander, public safety director in DeKalb County, Georgia.

But Alexander says it’s not just a matter of “rush through the community and pass out applications to be a police officer.” Mending rifts, he says, will take “patience and time.”

Among the strategies Alexander and others suggest is starting an Explorer program in the local schools. Open to youths 14 and up, the national program offers classes, field internships, ride-alongs and scholarships. Many graduates go on to careers in law enforcement.

That’s what Jeremiah Ricketts plans to do.

The Ocala, Florida, Police Department was so impressed with Jeremiah that they allowed him to join Explorer Post 962 when he was just 12. Now 16, he is post commander, with a rank of colonel.

Jeremiah says he’s gotten some flak from peers and even family members over his career choice. But there’s nothing he’d rather do.

“I really like helping people,” he says. “The police department brings me a sense of security.”

Bloomberg: NYPD stops should be changed, not ended