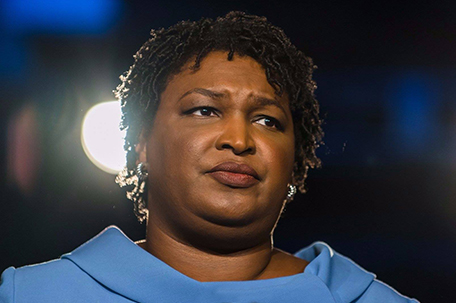 ABOVE PHOTO:  “We believe our chance for a stronger Georgia is just within reach, but we cannot seize it until all voices are heard,”  Stacey Abrams speaking to excited supporters on Wednesday night. (Photo: Stacey. Abrams.77)

By Bill Barrow and Ben Nadler

ATLANTA — Georgia’s hotly contested and potentially historic governor’s race may not be over yet, with Democrat Stacey Abrams and Republican Brian Kemp awaiting the final accounting of absentee and provisional ballots.

With reported votes approaching 3.8 million, Kemp was just shy of 51 percent, but Abrams and her campaign said there were enough ballots outstanding, particularly absentee ballots in heavily Democratic metro Atlanta counties, to bring the Republican below the majority threshold required for victory.

“We believe our chance for a stronger Georgia is just within reach, but we cannot seize it until all voices are heard,” Abrams told excited supporters who remained at a downtown Atlanta hotel into the early hours of Wednesday. “I promise you tonight we’re going to make sure that every vote is counted,” Abrams added.

As the clock neared 3 a.m., Kemp took his turn on a hotel stage in his hometown of Athens and expressed confidence that a final result — whenever it comes — will go his way.

“There are votes left to count, but we have a very strong lead,” Kemp said. “And folks, make no mistake, the math is on our side to win this election.”

If Kemp and Abrams were to finish below 50 percent, they would meet in a Dec. 4 runoff. Abrams’ campaign estimated early Wednesday morning that there are at least 97,000 ballots to be counted and she’d need a net gain of 24,379 votes to trigger a runoff.

That would mean four more weeks of bitter, race-laden campaigning in a contest both have described as a “battle for the soul of our state.”

With most of the rest of nation finishing its midterm campaigns, that would also focus a white-hot spotlight on a race that already has drawn massive investments of time, money and star power — from President Donald Trump and former President Barack Obama to media icon Oprah Winfrey — with Abrams trying to make history as the first black woman to lead a U.S. state and Kemp trying to keep GOP-run Georgia from sliding into presidential battleground status ahead of 2020.

Kemp mentioned Trump’s backing in his remarks early Wednesday, but said having his supporters in front of him was more important. “Over the last 21 months, we’ve chopped a lot of wood,” he said.

The prospects of a razor-thin result and potential runoff come after weeks of wrangling over a Georgia election system that Kemp runs in his post as secretary of state, leaving open the possibility that Abrams supporters may not accept a loss. Kemp has steadfastly defended his job performance and refused calls to step aside — the latest coming in an Election Day lawsuit.

The Protect Democracy nonprofit announced that it filed a lawsuit Tuesday seeking to keep Kemp from being involved in counting votes, certifying results or any runoff or recount. The lawsuit says that Kemp presiding over an election in which he is a candidate “violates a basic notion of fairness.” Secretary of State’s office spokeswoman Candice Broce called the lawsuit a “twelfth-hour stunt.”

Abrams has called Kemp “an architect of suppression,” and voting rights activists expressed concerns throughout Tuesday amid widespread reports of technical malfunctions and long lines at polling stations across the state. Some said they waited three hours to cast ballots, and watched dozens of voters abandon lines in frustration.

The elections chief wasn’t immune to the difficulties: When Kemp went to cast his ballot, he had an issue with his voter card, but it was fixed quickly. He walked by reporters and said, “Take Two.”

Abrams, a 44-year-old Atlanta attorney, former state minority leader and moonlighting romance novelist, already has made history as the first Black woman to be nominated for governor by either major party. She’d also be the first woman or nonwhite governor in Georgia history.

Kemp, a 54-year-old businessman and veteran secretary of state, is vying to maintain the GOP’s hold in a state where Republicans have won every governor’s race since 2002, though by increasingly narrow margins amid a growing and diversifying electorate.

Ballot access and election integrity flared up in the final weekend after a private citizen alerted the Georgia Democratic Party and a private attorney of vulnerability in the online voter database Kemp oversees. The attorney alerted the FBI and Kemp’s office, and then Kemp announced, without providing any evidence, that he was launching an investigation into Georgia Democrats for “possible cybercrimes.”

Kemp pushed back Monday against concerns that his call for an investigation is politically motivated. Abrams would have none of that, declaring Kemp a “bald-faced liar” intent on deflecting attention from security problems with his system.

The contest has been so intense that early voting approached the overall number of ballots cast in the governor’s race four years ago.

“I’ve never seen a time where the state of Georgia had more at stake than we do in this contest,” Kemp told supporters at one campaign stop.

In the closing days, Kemp basked in Trump’s glow, pulling out of a debate to attend a Sunday rally that drew thousands of boisterous Republicans to central Georgia to see Trump deplane from Air Force One.

Abrams, meanwhile, argued that the contest should be about more than identity politics.

The Georgia outcome also is among the most closely watched of any midterm contest because of Abrams’ aggressive strategy to attract new voters — particularly nonwhites and younger Georgians — with an unabashedly liberal message, rather than focusing on older voters within the traditional midterm electorate.