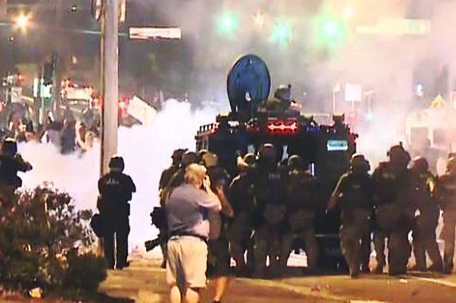 The best way that I can come up with to describe the mess that was 2014 is to compare it to my cousin’s wedding.

I was the Maid of Honor, so I had to go to Kentucky early to help get things together.

From the moment I got to my cousin’s house and saw her and her fiancée in action, I knew that this wasn’t going to end well. They argued the entire week leading up to the wedding, almost called it off twice, and nothing was organized.

When they got a divorce, I was far from surprised.

The year 2014 made me feel a lot like I did as I witnessed the train wreck that was my cousin’s wedding.

Like that day, I looked at 2014 as it unfolded and said to myself, “This isn’t going to end well.”

Unfortunately, I was right.

It’s hard to know where to start talking about the ridiculousness that was 2014, but I guess I’ll start locally.

The 2014 school year started with parents concerned about whether or not their kids would be in class on time. The School District of Philadelphia was in a cash crunch and increased taxes on cigarettes and liquor was the solution.

Then, the School Reform Commission because of a combination of finances and the Philadelphia Federation of Teachers refusal to accept a wage package that comes really close to hat passing, cancelled the teacher’s contract.

Before he got voted out of office in the midterm elections, Gov. Tom Corbett promised to look at a fair funding formula for the schools. I wonder if Governor-Elect Tom Wolf will take that up.

A lot of other people who won re-election in the midterms did so with legal clouds over their heads. State Reps Ron Waters and Vanessa Lowery Brown got caught up in the corruption scandal that sent former President Judge Thomasine Tynes to jail.

Congressman Chaka Fattah is under the federal investigatory microscope, while his son Chip has decided to defend himself on his federal charges.

Also on the federal level, President Barack Obama got a whole new group of Republicans who won’t want to work with him. Because the Democratic Party is the only group I know of that can ask for Black votes while running away from the person that can make sure you get them, the GOP is in control of both the Senate and the House. Look for weekly “repeal Obamacare” votes in the new year…and not much else.

But if there was one thing that stood out about 2014, it was the messy social issues it forced us to confront.

Former Baltimore Ravens running back Ray Rice and his wife Janay made us confront the issue of domestic violence thanks to the ‘Right’ Seen ‘Round The World.

The knockout blow Rice delivered to his wife (they got married shortly after the incident) forced the National Football League to take a look at how it handles the issue after activists chastised Commissioner Roger Goodell for Rice’s initial two-game penalty. Goodell shut him down for the season, but an arbitrator’s ruling reversed that.

Meanwhile Minnesota Vikings running back Adrian Peterson  got shelved for the year for taking a switch to his 4-year-old and cutting up his arms, legs and scrotum.

Thanks to Bill Cosby, and a quip from comedian Hannibal Burress,  we also had to talk about sexual assault in 2014. As of this writing, about 30 (!) women have come forward with stories of America’s Dad allegedly forcing his Jello Pudding Pop on them with a narcotic assist.

While a lot of  the stories aren’t new (many were part of a civil suit Cosby settled in 2005 with former Temple University employee  Andrea Constand) among the people telling them now is Beverly Johnson, the model who broke the color barrier for Vogue magazine cover models.

The scandal forced Cosby to resign his seat on the Board of Trustees at Temple University and Spelman College and the University of Massachusetts have also distanced themselves.

But as long as he has Whoopi Goldberg of “The View” in his corner, Cosby will be okay I guess. It also makes the whole “pull up your pants” ethos of the “pound cake” speech sound kind of ironic…

This year, Shonda Rhimes brought her show “How To Get Away With Murder”, and Oscar nominee Viola Davis to the small screen.

Meanwhile on America’s streets, the reality show version of “HTGAWM is playing out in the relationship between police and Black men.

In the month of August alone, four encounters between unarmed Black men and police ended with the unarmed person sporting a toe tag at the morgue.

From John Crawford being shot to death while checking out a BB gun in an Ohio Wal-Mart to Michael Brown being left to bake in the hot sun for over four hours on a Ferguson, Missouri street after being sprayed with bullets to Eric Garner being choked to death on a Staten Island street corner, and Ezell Ford in Los Angeles, folks got the message in August that it wasn’t Duck Season or Rabbit Season.

It was Brother Season.

After Grand Juries in Ferguson and New York decided not to indict police officers Darren Wilson and Daniel Panteleo, and with the death of 12-year-old Tamir Rice (killed for playing with a toy gun in Cleveland), folks walked off their Thanksgiving dinners by taking to the streets.

(Fortunately, the folks in Ferguson left the tanks in the garage this time. They weren’t a good look…)

Non-violent actions like street blocking and “die-ins” took place around the country. Members of the St. Louis Rams came out for a game with their hands up. NBA superstars like LeBron James, Kobe Bryant and Derek Rose and NFL running back Reggie Bush came out wearing t-shirts with Garner’s last words “I Can’t Breathe” on them.

But police departments, taking a demand for accountability as slap in the face, created t-shirts of their own using Garner’s last words in a way that can best be described as insensitive.

Last Saturday, Ismaaiyl Brinsley decided to start his day by shooting his ex-girlfriend Shaneka Thompson in the stomach and leaving her to die.

He then went to New York after proclaiming on Instagram that he wanted to “put wings on pigs”. Unfortunately, NYPD Officers Rafael Ramos and Wenjian Liu were the officers Brinsley chose to kill once he got to Brooklyn.

So of course everyone who believes that police departments are above critique laid  the fault for Brinsley’s heinous act was laid at the feet of everyone from the protestors, to New York Mayor Bill DeBlasio, to President Obama, to everyone who was marching for justice.

And it looks like DeBlasio is about to do what former Mayor Rudolph Giuliani did after the Sept. 11 terrorist attacks: throw civil liberties and the right to free speech under the bus.

I knew this wasn’t going to end well…

And as if the year itself wasn’t bad enough, we lost a lot of people who sometimes made it a little better.

We also lost The Professor from “Gilligan’s Island” (Russell Johnson) Anthony from “Designing Women” (Meshach Taylor), Alice from “The Brady Bunch” (Ann B. Davis) and Mrs. Kotter from “Welcome Back, Kotter” (Marcia Strassman).

And then there were the deaths no one saw coming. America’s favorite fashion cop Joan Rivers died from a routine procedure. Academy award winning actor Phillip Seymour Hoffman died of a drug overdose.

Even Marion Barry, the man who beat the odds, an addiction to crack, and just about everything else as Washington, D.C’s “Mayor for Life” left us this year.

But it was the death of Robin Williams that had everyone talking because finding out that someone that funny and talented was so hurt by depression that he took his life was almost as shocking as the realization that you can’t leave your drink around the man who gave us “Fat Albert and the Cosby Kids” at a party.

But these are the kind of things that could only happen in 2014.