A moment with John Fetterman 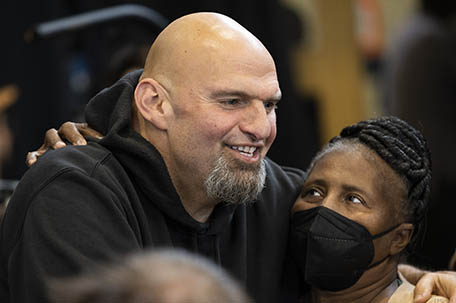 As he continues along the campaign trail, Democratic U.S. Senate candidate John Fetterman took a few moments to share some of his vision for the office.

When Pennsylvania’s current U.S. Senator Pat Toomey announced that he wasn’t going to seek another six-year term in office, the open seat led a lot of people to think about throwing their hats into the ring.

One of the people who ultimately did was John Fetterman, Pennsylvania’s current Lt. Governor. This isn’t the first time he’s run for Senate — he was among those vying for the Democratic nomination in 2016 — but it’s the first time he’s got a shot at heading to Washington.

In this brief Q&A with the SUN, Fetterman talks about what he’s learned from Pennsylvanians this time around, how he hopes to put the “working class” front and center if he gets to Washington, and how the stroke he suffered before the May primary has influenced his thinking and that of the voters.

This interview was conducted via email.

SUN: First of all, thank you for responding to this email. This isn’t your first statewide race, but I’m sure that there’s something new you’ve learned about the Commonwealth every time you’ve run. What have you learned this time around?

JF: I suffered a stroke a few days before the primary in May. And in the months since, as I’ve traveled around the state, I have been stunned by the number of people who come up to me and share their own health stories. People who’ve had strokes, or heart attacks, or other serious scares.

I’ve realized just how universal health challenges like the one I experienced are. Access to healthcare is a  basic, fundamental human right. I’ve always known that to be true, but I feel it even more now. So it’s not only my own experience that has driven me to fight harder for healthcare access — it’s also the stories of all of these Pennsylvanians who’ve shared their stories with me on the campaign trail in the time since.

SUN: Healthcare is a big issue here in Pennsylvania. Has your own personal health challenge impacted your policy toward healthcare, and do you think it provides you an insight that you didn’t have before?

JF: I was incredibly lucky that I was in Lancaster, near one of Pennsylvania’s best stroke centers, when I had my stroke. I was lucky to have good healthcare, too. But it shouldn’t come down to luck.

When I’ve spoken at events recently, I ask the audience if they’ve experienced a major health scare personally or if someone else in their family has. The vast, vast majority of hands go up — no matter where I am. The unfortunate reality is that we all will have an experience like this at some point in our lives. But right now, not all of us have access to the health care that kept me alive. That’s wrong and it must change.

SUN: What do you see as the Commonwealth’s biggest challenge and what, if anything, do you think you can do as a senator to solve it?  Please be specific.

JF: Across Pennsylvania, prices are soaring as working people are getting ripped off and families are struggling to get by because of corporate greed and leaders who go to Washington and forget about the people who sent them there.

If we are going to bring down prices for working people, we need more leaders who will put the needs of working families above the needs of corporations and the super-wealthy and who will hold Washington accountable. We need real, pro-worker, common sense solutions.

Here’s my plan for working families: I’ll fight to make more stuff right here in Pennsylvania which will curb inflation and bring down prices at the grocery store and gas pump. I’ll also cut taxes for working people by ensuring the super wealthy are paying their fair share. We also must slash out-of-pocket healthcare costs by holding huge pharmaceutical companies accountable and stopping them from jacking up the prices on prescription medicine. And I’ll put an end to the immoral act of price gouging across the board. Over the past couple years, while huge corporations have raised the prices on essentials like gas and food, they’ve made record profits. We must hold them accountable and drive prices down.

SUN: Your appearance on Saturday was the first time that many Philadelphians have had a chance to interact with you in a while. Considering the fact that this is a city that has traditionally had low turnout in midterm elections, and enthusiasm plays a big part in electoral politics, how do you motivate these voters to turn out for you? Also, Philadelphia was largely ignored by outgoing Sen. Pat Toomey in his 12 years representing us. What can you do to reassure Philadelphians that they’ll get more attention if you’re elected to represent them in the Senate?

JF: I am so excited to be back on the trail and back here in Philadelphia this weekend. Pat Toomey has spent twelve years not just avoiding Pennsylvania when he’s in the state, but not working in the interest of Philadelphia families. Philadelphia deserves better.

I have spent my whole career working to make peoples’ lives better. Dr. Oz has spent his career making himself rich at the expense of the most vulnerable. As mayor of one of the poorest communities in PA, I worked to make my town safer. We drove crime out and brought jobs in. Then as Lieutenant Governor, I used my platform to push for policies like strengthening the union way of life, legalizing marijuana, and fighting for wrongfully incarcerated Pennsylvanians. I fight for the people I represent — I always have and always will. My promise to the people of Philadelphia is I’ll never stop fighting for you as your U.S. Senator.

We’re going to win this race and send Dr. Oz back to New Jersey, but we can’t do it without your help. This race is just so critical. So much is on the line, from abortion rights to our democracy and voting rights, to the union way of life. We need to win in Pennsylvania if we want Democrats to keep control of the Senate. And to win Pennsylvania, we need to turn everyone out in Philadelphia.

Our campaign is not taking Philadelphia for granted. I was in Philadelphia last week for a tour of Black-owned small businesses on the 52nd St. Corridor in West Philadelphia, this Saturday for a rally, and I’ll be back many more times before November.

SUN: A primary focus of your campaign has been on making things better for working-class families. Please define “working class” and what that means for a city like Philadelphia. Also, Philadelphia is the poorest big city in the nation. It is also predominantly Black and brown. What will you do as a senator to address poverty?

JF: When I say working class, I don’t just mean old factory towns in Western PA. I mean every community across PA that has been sold out and left behind by our leaders in Washington. I mean families in neighborhoods like North and West Philadelphia and Kensington who may struggle to pay bills, and whose schools and hospitals are under-resourced, and whose neighborhoods don’t have enough jobs.

We can support working families and address poverty by bringing down prices at the grocery store, the gas pump, and the doctor’s office. To do that, we need to crack down on corporate greed and outlaw price gouging. We also need to fight to guarantee healthcare to every American, and we must raise the minimum wage — because living on $7.25 per hour is just not possible. I’ll also be a fierce defender of workers’ rights and the union way of life in the Senate because I know the importance of unions when it comes to advocating for working people.

We also need to fight to bring federal funding home so that the city of Philadelphia has the resources needed to fully support families and keep people safe.

To make this happen, we need leaders who will hold Washington accountable for prioritizing the wealthy over the working class and ignoring Black and brown communities in Philadelphia. But we know that Dr. Oz will only fight for himself, and his billionaire CEO friends because that’s what he’s always done — he has no principles or core beliefs

SUN: Thanks so much for your time!