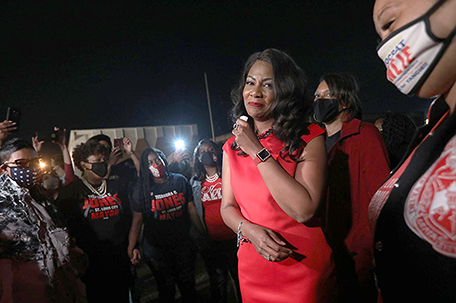 ABOVE PHOTO: Delta Sigma Theta sorority sisters serenade and celebrate St. Louis Mayor-elect Tishaura Jones’ victory during her watch party Tuesday, April 6, 2021, in St. Louis. Jones, who has been outspoken in her criticism of the criminal justice system’s “arrest and incarcerate” model, won election Tuesday and will take over as the first Black female mayor in a city beset by yet another wave of violent crime. (Laurie Skrivan/St. Louis Post-Dispatch via AP)

ST. LOUIS — St. Louis Treasurer Tishaura Jones, who has been outspoken in her criticism of the criminal justice system’s “arrest and incarcerate” model, won election Tuesday and will take over as the first Black female mayor in a city beset by yet another wave of violent crime.

Jones defeated Alderwoman Cara Spencer in the general election with 51.7% to Spencer’s 47.8%, based on unofficial results posted on the city’s website. She will be sworn in on April 20.

“St. Louis: This is an opportunity for us to rise,” Jones said in her victory speech. “I told you when I was running that we aren’t done avoiding tough conversations. We are done ignoring the racism that has held our city and our region back.”

Spencer, in her concession, noted the historic achievement of her opponent.

“This is something we should all celebrate,” Spencer said. “Our city broke a glass ceiling tonight, a ceiling that shouldn’t have been there.”

Jones, 49, is a former state representative who has been treasurer since 2013. She will replace incumbent Mayor Lyda Krewson, who announced in November that she would not seek a second term. Krewson, 67, is the city’s first female mayor.

In her new job, Jones faces many challenges. The population that peaked at 856,796 in 1950 is now just above 300,000, and people are still leaving for the suburbs. Businesses, including downtown restaurants and shops, are still struggling to recover from COVID-19 shutdowns.

But Jones and Spencer agreed that no crisis is as important as curbing violence, especially killings. Police statistics show that 262 people were killed in St. Louis last year — five fewer than the record of 267 set in 1993. But because the city’s population has declined sharply since 1993, the per capita homicide rate was much higher in 2020.

Already, 2021 is shaping up to be even worse. The city has recorded 46 killings through Tuesday, about 10 ahead of last year’s dangerously high pace.

Krewson, whose husband was fatally shot in a 1995 carjacking, ran in 2017 on a pledge to battle crime, but the city saw a staggering increase in killings during the coronavirus pandemic.

About 48% of St. Louis residents are white, 45% are Black. While both Jones and Spencer are Democrats, Jones in a recent debate questioned if another white mayor could adequately lead the city, noting that a “white person doesn’t have to worry about their children getting hit by a stray bullet when he’s outside.”

“While I appreciate the role of white allies in this movement of progress, I don’t believe that they have the lived experiences to lead a majority-minority city,” Jones said in the debate.

Her victory speech focused largely on overcoming racism and bigotry.

Until this year, St. Louis hosted Democratic and Republican primary elections in March, with the winners competing in April.

But St. Louis is so heavily Democratic that the general election became an afterthought. City voters in November approved a new nonpartisan format in which all candidates compete against each other in March, with the top two vote-getters advancing.

Jones received the most votes in the primary, and Spencer edged out two other candidates for the other spot.