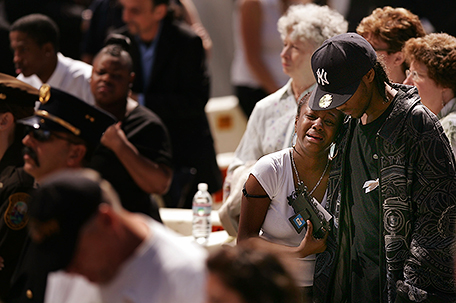 ABOVE PHOTO:  A couple comforts each other inside the family of victims staging area at ground zero, in New York, during the fifth anniversary of the terrorist attacks. (AP Photo/Spencer Platt, Pool)

NEW YORK — They were kids, or not even born yet, when America’s heart broke for them.

More than 3,000 children and young adults lost a parent in the deadliest terror attack on American soil, instantly becoming known as the children of 9/11.

As the 15th anniversary of the attacks approaches, these children are now adults or nearly so, and their Sept. 11 legacy is now theirs to shape.

Many have been guided by a determination to honor the parent they lost or the awareness they so painfully gained. And they have done it in ways as varied as working with refugees, studying the forces that led to the attacks and pursuing a parent’s unrealized pro-sports dream.

Here are some of their stories.

It’s Lindsay Weinberg’s job to find and notify families whose loved ones have died, sometimes under violent circumstances. It’s a job she’s particularly prepared to do.

“I’m giving them among the worst news they can receive, and I’ve received it,” she says.

Weinberg was 12 when the New York City medical examiner’s office, where she now works, told her family in 2002 that it had identified her father’s remains among the victims of 9/11.

“It adds to the amount of empathy that I can have,” says the 26-year-old, whose father, Steven Weinberg, was an accounting manager killed at the World Trade Center.

After recognizing how forensic science helped provide answers for her family, Lindsay got a master’s degree in it, and is now an outreach investigator. She hasn’t worked on the continuing analysis of the more than 21,000 bits of bone found at ground zero.

She says her connection to 9/11 is “not something that I lead with, personally or professionally.” But working at the medical examiner’s office, she says, shows “how things kind of come full circle.”

“I THOUGHT, ‘WHAT WAS IT WE SHARED THE MOST?’ AND IT WAS WRESTLING”

Looking up at the seats where they always sat “was like a punch to the heart,” she says.

She was 10 when she overheard her father calling her mother to say goodbye from the Trade Center’s north tower, where he worked as a telecommunications analyst. Growing up, she pondered how to honor him.

“I thought: ‘What was it we shared the most?’ And it was wrestling,” she recalls. 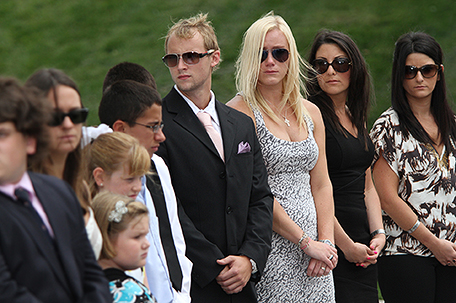 Michael Trinidad was a former high school wrestler who didn’t flinch when his tomboy daughter did leaping moves off the furniture. In fact, “he’d say, ‘No, you’re doing it wrong — let me show you,’” says Thea, 25, who lives in Tampa, Florida.

At first, the 5-foot-tall wrestler didn’t let on about her dad as she backflipped and body-slammed under the monikers Divina Fly and Rosita. (She now uses her own name). She didn’t want anyone thinking she was making a play for sympathy.

After her story emerged, Pro Wrestling Illustrated magazine named her Inspirational Wrestler of the Year in 2011.

She says she feels her father’s spirit every time she goes into the ring.

“This one’s for you, Dad,” she tells herself. “Protect me out there.”