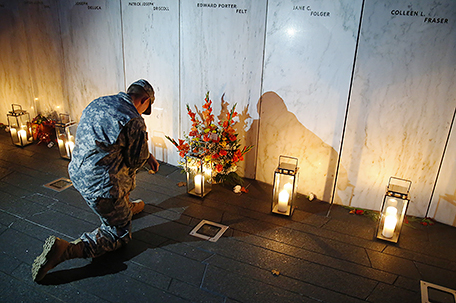 ABOVE PHOTO:  Edward Noon, 22, of the Pennsylvania National Guard, pays tribute to the passengers and crew of Flight 93, while candles are lit along the Wall of Names at the Flight 93 National Memorial in Shanksville, Pa, Saturday, Sept. 10, 2016, as the nation marks the 15th anniversary of the Sept. 11 attacks.  (AP Photo/Jared Wickerham)

NEW YORK — They were kids, or not even born yet, when America’s heart broke for them.

More than 3,000 children and young adults lost a parent in the deadliest terror attack on American soil, instantly becoming known as the children of 9/11.

As the 15th anniversary of the attacks approaches, these children are now adults or nearly so, and their Sept. 11 legacy is now theirs to shape.

Many have been guided by a determination to honor the parent they lost or the awareness they so painfully gained. And they have done it in ways as varied as working with refugees, studying the forces that led to the attacks and pursuing a parent’s unrealized pro-sports dream.

Here are some more of their stories.

“POSITIVE,PERSONAL GROWTH OUT OF SOMETHING THAT WAS SO HORRIFIC”

They had come from people around the country and world, many of them strangers, after the attacks killed his father and namesake, an investment executive. Michael was 6. His widowed mother had just given birth to a baby girl two months earlier.

“Hearing how people were so selfless and so caring to us really made me want to try to do something, career-wise, that I thought would help other people,” he says.

He decided that would be public service, since he was already interested in politics. By high school, he was interning for a state assemblyman.

Now 21 and newly graduated from George Washington University, he got his first job working at a Washington firm that helps political campaigns handle their finances properly. He sees himself eventually working in government as an adviser or aide.

“I really try and at least get positive personal growth out of something that was so horrific,” he says, “rather than let it break me down.”

“THE LOVE AND THE HERITAGE COMES THROUGH”

Anjunelly Jean-Pierre once had her future all figured out. She planned on joining the military and eventually becoming the doctor or lawyer her mother envisioned.

Then her mother, Maxima Jean-Pierre, was killed at the World Trade Center, where the immigrant from the Dominican Republic managed an executive cafe.

Over the next few years, Anjunelly grieved, regrouped and decided she wanted to do what her mother did. Recalling the Sunday dinners that filled the house with friends and family, “I saw how food brings people together,” says Anjunelly, 34.

After culinary school and a stint as a sous-chef for an Emeril Lagasse TV show, Anjunelly now works in a setting where bringing people together is perhaps especially important: She is a manager in the Members’ Dining Room in Congress.

Last September, a letter she wrote about Maxima was entered into the Congressional Record. One of the most popular dishes she’s made over the years was Maxima’s rice and peas, she wrote: “I guess the love and the heritage comes through.”

“I WANTED TO MAKE SURE IT NEVER HAPPENED AGAIN”

Alexandra Wald wanted to understand. She soaked up books about the forces and failures that led to Sept. 11. She took four years of Arabic in college, got a master’s degree in international relations and aspired to work in intelligence.

“Being as affected as I was by the geopolitical landscape and my dad being killed on 9/11,” she says, “I wanted to make sure it never happened again.”

It was her first day of high school when her father, stockbroker Victor Wald, was killed at the World Trade Center.

His daughter, who goes by Alex, was already interested in world events. But 9/11 made her want “to be that person to decipher that information, to protect the homeland.”

Now 28, she works on a cybersecurity project for a contractor for the federal General Services Administration in Washington.

Studying for her career — with help from the Families of Freedom Scholarship Fund, set up for the children of 9/11 victims — also meant dealing with the frustration of contemplating missed opportunities to disrupt the terror plot.

When the anger stirred, she’d think of some advice her father gave her a few weeks before the attacks.

“ONCE IT’S ON MY SKIN, I HAVE TO TALK ABOUT IT”

It’s all right to ask Ryan McGowan about the “IX.XI” tattooed on the back of her neck. It’s 9/11 in Roman numerals.

Ryan was 5, sister Casey 4, when their mother, investment executive Stacey Sennas McGowan, was killed at the trade center.

As a preteen, Ryan partly played the role of parent, helping her sister pick outfits for school and making dinner when their father, Tom, had to work. She came to think of her mother as “an amazing guardian angel.”

Now 20, Ryan is a junior majoring in marketing at Boston College, where 19-year-old Casey is a sophomore in communications.

Often, Ryan makes her way through the campus to a labyrinth inscribed with her mom’s name and those of 21 fellow BC graduates killed in 9/11. It’s a place she feels close to her mother, whose remains were never identified and buried.

“I can just sit there and reflect,” she says. “I don’t have that anywhere else.”

“I WANTED TO PLAY IN HONOR OF MY DAD”

Ronald Milam Jr. doesn’t always tell his football and basketball teammates that there’s a reason he wears the number 33. It’s for his father, Army Maj. Ronald Milam, who was 33 when he was killed at the Pentagon on 9/11.

Ronald Jr. never met his father. His mother, then-Air Force Capt. Jacqueline Milam, was pregnant with him on 9/11. She safely escaped from the Pentagon.

Ronald Jr., now a 14-year-old high school freshman in San Antonio, is one of the more than 100 Sept. 11 victims’ children who were born after the attacks.

He has his dad’s features and unflappable personality. And his jersey number was a connection he could make with his father, a college player himself.

US Muslims draw inspiration from Ali’s fight for his faith