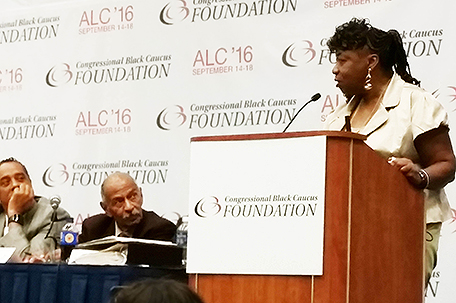 “Defining the Moment, Building the Movement”

This year’s theme—“Defining the Moment, Building the Movement” — highlighted a culmination of social and political moments in American history that have defined the CBC and the CBCF. The signature events—including the Black Party, Celebration of Leadership in Fine Arts, Gospel Extravaganza, National Town Hall—were all well received. The conference ended with the Annual Phoenix Awards Dinner, and featured an impassioned speech from President Obama, making his final appearance as Commander in Chief at the event.

The CBCF Annual Legislative Conference (ALC) is the leading policy conference on issues impacting African Americans and the global Black community. When the first ALC was held in 1970; 13 African American lawmakers were in attendance. The following year, the Congressional Black Caucus was official established.

This year’s exhibit showcase featured author, health and marketplace pavilions, as well as the CBCF Red Carpet Media Row, a culinary cooking stage and a design studio. The 16 official Radio Row Media Partners included Philadelphia’s WURD 900AM, the only African American owned and operated talk radio station in Pennsylvania,  one of a handful still operating the the United States..

The Congressional Black Caucus Foundation, Incorporated (CBCF) launched its 46th Annual Legislative Conference (ALC) with a strong message about the importance and power of the African-American vote—during a press conference outlining its new Voter Protection Series, on-site voter registration opportunities and other resources.

One of the key tools they introduced was an educational pamphlet called the CBCF Voting Rights Toolkit. It outlines voting rights, contains a map of states with voter ID laws and a basic “Voting 101” glossary. It also has a section entitled “What Can I Do?” which lists concrete steps individuals can take to prepare themselves and educate others about the voting process and requirements in their individual states. Attendees were encouraged to distribute the pamphlets in their communities. Those who are interested in learning more can email [email protected]

Two of the panel discussions in the new series were entitled “The Federal Case for Voter Protection and the VRA, which addressed the challenges of voter suppression and the important work necessary to ensure the Voting Rights Act effectively combats present day voter discrimination. More than 34 states have introduced new restrictive voting laws, ranging from those restricting early voting days to ID requirements, despite the lack of evidence of voter fraud. Another dealt strictly with 17 states will have new voting restrictions in place for the first time in a presidential election.” The 2016 election will be the first presidential election without the protection of the full 1965 Voting Rights Act. The result of new age voter discrimination is the systematic and disproportionate disenfranchisement of millions of people of color, naturalized citizens, young people, the disabled, and the poor. 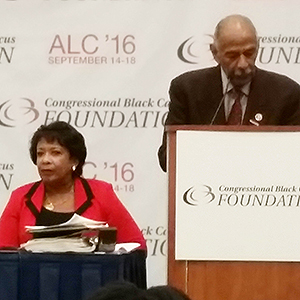 The  opening event for the National Town Hall Meeting was, “The Black Agenda for the Next Administration: What’s at Stake!.”  The session officially opened the conference and brought together leaders in academia, public policy, and social justice who explored the potential implications of the presidential election on the African-American community

In her opening remarks, Rep. Bass touched upon this year’s conference theme, explaining to those present that our moment was eight years of leadership under America’s first Black president, but nothing really changes in this country without a great movement.

“We cannot wait. Personally, I have faith in the American people, that it is going to turn out the way it must turn out in November, because we’re [African Americans] going to turn out. We can’t wait until next year, or the year after, to talk about what we want to see in the next administration – we have to get busy with that now,” Bass said.

Ryan outlined some of the many policy agenda items in play concerning the African American community and the next administration, including criminal justice, recent police shootings, health and education disparities and more.

“There’s a lot at stake when we are talking about number 45[ President Obama’s successor],” Ryan said. “In your community, in your state, and in this nation.we have a lot at stake.”

The topic of  the“Black Lives Matters” vs “All Lives Matter” controversy was raised. To Dr. Malveaux, it was a flawed argument, at best. 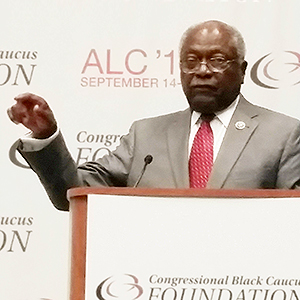 Quoting Professor Hall of Agnus Scott College, Malveaux said “ ‘Whitenesss is a powerful PR machine;’; we[African Americans] are not affirmed” “We have not insisted upon our space. The Black Lives Matter[movement] insists upon our space. It insists upon our recognition–It does not mean all lives do not matter. All lives have always mattered.”

Citing several election agenda action items that are a priority for African Americans now and during the next Congress and administration, Rep. Scott urged the attendees to begin to consider the alternatives seriously now rather than later.

“We need to make sure we don’t sleep through criminal justice reform, when they pass through some thing that doesn’t do anything, or something that makes things worse, with new mandatory minimums, or expanded mandatory minimums.We want to make sure that debate takes place, and that people are paying attention…You cannot sleep through an election, and hope that the people are going to have your best interests at heart.” Scott said.

The Environmental Justice Braintrust of each year’s CBCF conference focuses on the unique relationship between environmental protection, environmental justice, economic development, and human health. This year’s braintrust — headed by CBC member, Rep. James Clyburn — featured a panel entitled, “Education: A Social Determinant to Reduce Racial Disparites.” When viewing the social determinants that play a role in communities with disproportionate health problems, education is a major factor. The panel brought together stakeholders to discuss the role education plays and how to improve access to education in all communities.

The panel was moderated by Dr. Phillip Atiba Goff of the UCLA Center on Policing Equity. Opening remarks were delivered by the Honorable Loretta Lynch, United States Attorney General and Rep. John Conyers (D-MI), co-founder of the Congressional Black Caucus and Dean of the United States House of Representatives.

Gwen Carr, mother of the late Eric Garner spoke to the group about her journey from mother to activist through her grief.

“I was just a regular mother, going to work everyday,coming home, minding my own business, very low key, but after this incident it heighted my awareness of how cruel some individuals can be. You know people ask me ‘Do you think we need more Black police?’ I tell them we need better policing,because if we had better policing police who follow protocol, who came to work to do the job, we would have better community relationships, I think that the people would respect the people more…People want safe communities as much as people want to keep them safe.”

She also called upon the formation of a national program or consortium of those who already who are out in the community addressing these issues.

“It [the group focused on policing issues]should be national. We’ve got so many communities, and we have so many people getting killed in these communities; if each community would form a group, we’d have a national action going on…me, I’m with the National Action Network, who[already] has chapters across the United States; that is a beginning,” Carr said.  Law enforcement officials on the panel gave an overview of what is working on their in dividual departments.

“One-we have a police department that reflects the community that it serves,” said Sheriff Napoleon. “There are folks like me who run the police department…Second thing that I think is critical to having a great relationship with the police dpartment in the city of Detroit is that we had to live in the city. I believe that you have to lay your head where you make your bread,” he concluded, Ron Davis, Director of the COPS Office under Attorney General Loretta Lynch at the Department of Justice gave an overview of the program and some of the methods being used to gather the data needed to help improve community policing.

The conference concluded on Saturday, September 17th with the Annual Phoenix Awards Dinner.

President Obama officially addressed the group for the final time. He was an active CBC member during his time as a senator. After quipping that the next time he attends the event, he’ll have to buy a ticket, Obama moved on to a summary statement about his historic time in office, ending with a fiery and impassioned charge to those present about the need to continue the work they started together in 2008, especially in light of recent challenges to voting rights across the country.

He invoked the memory of those who made sacrifices for full voting rights in the country, citing some of the recent murmurings from those who are less than enthused about voting on November 8th, saying that their votes don’t matter, and that it does not matter who we elect that day.

“Read up on your history! It matters!” Obama said, striking the podium for emphasis.

The president warned them of the damaging repercussions that will take place should Trump and the GOP win, especially if those voters who turned out for him in 2008 and 2012 do not turn out to support the Democratic presidential nominee, Hillary Clinton this year.