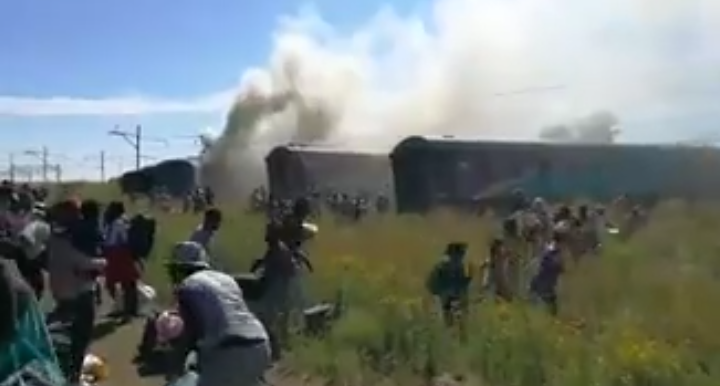 JOHANNESBURG (AP) — A passenger train carrying people home after the holidays slammed into a truck in rural South Africa on Thursday, killing at least 18 people and injuring about 260 others, authorities said.

Officials said the truck driver allegedly tried to cross the tracks just ahead of the oncoming train, part of which burst into flames after the collision, trapping some passengers in carriages. Those who were able to escape with their luggage hurriedly dragged bags from the smoking wreck to a nearby road.

“The truck driver was taking chances. He thought that he was going to pass through,” Transport Minister Joe Maswanganyi told journalists. “Little did he know that the train was going to hit him. That has cost a lot of lives.”

Some of the dead were badly burned, said Mthuthuzeli Swartz, acting CEO of the state-owned passenger rail agency.

The train with 429 passengers aboard had been traveling from Port Elizabeth to the country’s commercial hub, Johannesburg.

Video showed part of the Shosholoza Meyl train in flames after the collision that occurred between the communities of Hennenman and Kroonstad in Free State province. The crash derailed half a dozen carriages, and power lines were damaged. A large vehicle was upside down beside a train carriage that appeared to have partly crushed another, smaller vehicle.

He told local media outlet eNCA that the truck towing two trailers was halfway across the track when it was hit by the train and dragged for 400 meters (1,300 feet).