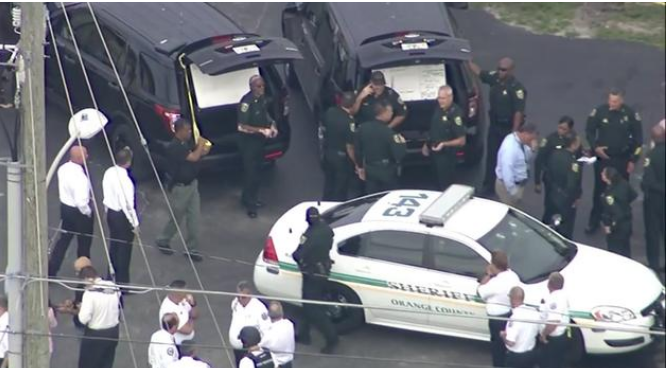 ORLANDO, Fla. (KABC) –Authorities said five people have been killed in a workplace shooting near Orlando.

Orange County Sheriff Jerry Demings said during a briefing Monday that the gunman was a disgruntled former employee who was fired in April. Demings says the gunman shot and killed himself. The sheriff says the shooting is not believed to have any link to terrorism.

The shooting happened inside a business that manufactures awnings.

The sheriff said the shooter, who has not yet been identified, had been involved in a previous workplace violence incident and had been accused of battering another employee inside the business. He was not charged in that case.

Shelley Adams said her sister, Sheila McIntyre, called her from the company’s bathroom during the shooting and was very upset.

The sheriff’s office reported the situation is “contained,” meaning there is no longer an active shooter. The shooting was reported about 8 a.m. Monday.

Authorities closed the road near the scene and have urged motorists to “use caution.” A media staging area has been set up near the scene.

No further details were immediately available.

Gov. Rick Scott said he had been briefed by law enforcement and that he and his wife, Ann, “are praying for the families who lost loved ones today.”

“I ask all Floridians to pray for the families impacted by this senseless act of violence,” he added.