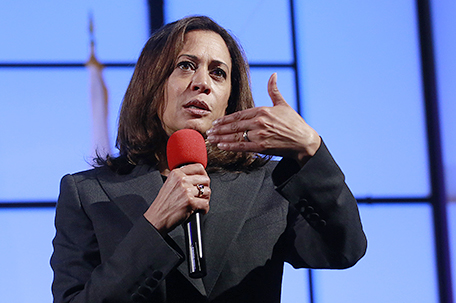 ABOVE PHOTO:  U.S. Sen. Kamala Harris, D-Calif., speaks at a a town hall meeting Thursday, April 5, 2018, in Sacramento, Calif. Harris discussed the shooting death of Stephon Clark on March 18 by two Sacramento police officers, saying that Clark should not have lost his life. (AP Photo/Rich Pedroncelli)

ATLANTA — Look closely enough at the 2018 midterm campaign and you’ll see the stirrings of a Democratic scramble to reclaim the White House from President Donald Trump.

Their movements reflect competing strategies for establishing their reputations and shaping a party that lacks a clear leader and consistent message in the Trump era.

For senators trying to get better known, a primary goal is proving fundraising strength and party loyalty, without necessarily taking sides in the larger fight between the left and moderates who split on the minimum wage, health insurance and other issues.

“I just want to do whatever I can” to help Democrats win, Harris said at a recent stop in Georgia, where she was campaigning and raising money for Stacey Abrams’ race for governor.

It is part of an aggressive effort for the freshman senator. She’s raised $3.5 million for her Senate colleagues and the Democratic Senatorial Campaign Committee, plus what she helps candidates such as Abrams raise directly when she appears with them, and at the end of April Harris had nearly a $1 million balance in the political action committee that she uses to back other Democrats.

Warren boasts that she’s raised $15 million for other Democrats since her 2013 election. The Massachusetts senator faces a re-election campaign this fall, but not as tough a race as confronts 10 colleagues running in states where Trump won. Like Harris, Warren and New Jersey Sen. Cory Booker have aided those senators.

Warren is also helping other branches of the party: a transfer of money to House Democrats’ campaign committee, $5,000 for every state party and $175,000 spread across state legislative campaigns in contested states.

Democratic and Republican campaign veterans say such contributions and fundraising trips aren’t explicitly about future campaigns. “We’re not playing 3D chess,” says Harris spokeswoman Lily Adams, who describes the senator’s priority as “building our numbers in the Senate” for the final two years of Trump’s term, while looking for strong women and minority candidates. (Abrams would be the first female African-American governor in U.S. history.)

Operatives also insist there are no quid pro quos, though Republican presidential campaign veteran Rick Tyler says, “These guys are out there accumulating chits.”

Tyler worked for Texas Sen. Ted Cruz’s 2016 White House campaign. Cruz was among the conservatives who traveled the country before his campaign, endorsing like-minded conservatives and raising money. Trump’s improbable rise obliterated that groundwork, but Tyler said it’s nonetheless a necessary part of a national campaign, because prospective presidents build their networks and test messages as they meet activists and voters beyond their personal bases.

Harris, for example, is noticeably avoiding most early presidential nominating states — no trips to Iowa or New Hampshire so far. Because 10 Senate Democrats must seek re-election in states Trump won, her travels do put her in some of the pivotal states in the battle to control the Senate. She’s been to Ohio five times for Sen. Sherrod Brown, twice to Michigan for Sen. Debbie Stabenow and once to Florida for Sen. Bill Nelson. She has a June trip planned for Wisconsin Sen. Tammy Baldwin. Warren has been to Ohio at least four times this campaign season and traveled to Michigan and Wisconsin, among others states.

Those states helped give Trump the presidency. They also could prove important as primary states in an extended nominating fight that could materialize with a large field and Democrats’ proportional distribution of nominating convention delegates.

Sanders, whose insurgent presidential campaign in 2016 emboldened the Democrats’ left flank, is perhaps the most unabashed of the potential 2020 group about using this year’s midterms to put his preferred policy stamp on the party. A prolific small-dollar fundraiser, the Vermont senator no longer has to prove he can raise money or draw a crowd.

“I have been very critical about the business model of the Democratic Party,” Sanders told The Associated Press. He said his travel to 28 states since Trump took office and his endorsements in federal and state races are part of his promised “political revolution” intended to advance ideas like a $15 minimum wage, tuition-free college and universal health insurance.

Biden is at the opposite end of Democrats’ identity battle. His endorsement list and fundraising itinerary are replete with state party dinners, events for sitting Democratic senators and rallies for candidates running as moderates, at least in tone, if not in policy preference. “I love Bernie, but … I don’t think 500 billionaires are the reason we are in trouble,” Biden said at a recent Brookings Institution speech about his priorities for the middle class.

Biden’s aides say he’s willing to help any Democrat get elected, but the native of Scranton, Pennsylvania, who loves to wax eloquent about his working-class upbringing is in demand to campaign for Democrats running in GOP-leaning places. He headlined fundraisers and campaign rallies for first-year Alabama Sen. Doug Jones and new Pennsylvania Rep. Conor Lamb, who won among voters who had sided overwhelmingly with Trump in 2016. Biden’s next planned campaign venture is to North Carolina on behalf of Democrat Dan McCready, a veteran trying to win a suburban Charlotte House district that wasn’t competitive two years ago.

Certainly, many Democratic hopefuls around the country are accepting help from multiple would-be presidents, and the alignments don’t always follow cleanly along the party’s philosophical battle lines.

Abrams has campaigned as a liberal, but her primary opponent has hammered her for cutting deals with Republicans in Georgia’s General Assembly. Besides Harris, she’s campaigned alongside Booker and gotten an endorsement from Sanders, who’s offered to campaign for her.

When reporters tried to ask Harris and Abrams about 2020, they both smiled and walked away.