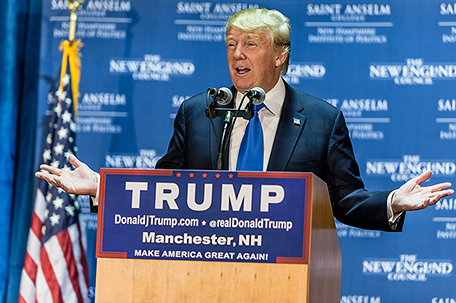 •On John McCain’s war record (July): “He’s not a war hero…He’s a war hero because he was captured. I like people who weren’t captured.”

•On giving out Lindsey Graham’s phone number (July): “He doesn’t seem like a very bright guy. He actually probably seems to me not as bright as Rick Perry. I think Rick Perry probably is smarter than Lindsey Graham.”

•On refusing to pledge to support the eventual Republican nominee, during first debate (August): “I will not make the pledge at this time.”

•On Carly Fiorina, in a Rolling Stone interview (September): “Look at that face! Would anyone vote for that? Can you imagine that, the face of our next president?!”

•On not challenging anti-Muslim questioner who said he needs to get rid of Muslims (September): “We’re going to be looking at a lot of different things.”

•On blaming George W. Bush for 911 (October): “When you talk about George Bush, I mean, say what you want, the World Trade Center came down during his time.”

•On questioning voters in the first caucus state who were supporting Ben Carson in the polls (November): “How stupid are the people of Iowa?”

•On falsely recalling “thousands” of people celebrating on 911 (November): “I watched when the World Trade Center came tumbling down, and I watched in Jersey City, New Jersey where thousands and thousands of people were cheering as that building was coming down.”

•On disruptive protestor at Birmingham, Ala. event (November): “Maybe he should have been roughed up, because it was absolutely disgusting what he was doing. I have a lot of fans, and they were not happy about it. And this was a very obnoxious guy who was a troublemaker who was looking to make trouble.”

Is Donald Trump’s campaign a platform for white supremacy?