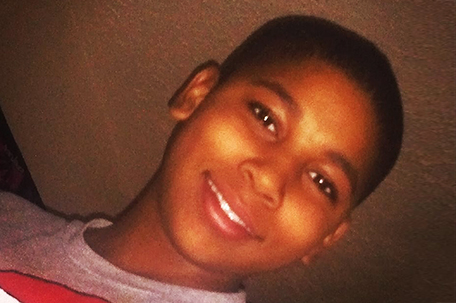 ABOVE PHOTO:  This undated photo provided by the family’s attorney shows Tamir Rice. Rice, 12, was fatally shot by police in Cleveland after brandishing what turned out to be a replica gun, triggering an investigation into his death and a legislator’s call for such weapons to be brightly colored or bear special markings.  (AP Photo/Courtesy Richardson &amp; Kucharski Co., L.P.A.)

CLEVELAND — The family of a 12-year-old boy fatally wounded by a Cleveland police officer said surveillance video of the shooting shows that if the officer had not acted so quickly the youngster would still be alive.

The video made public on Wednesday shows Tamir Rice being shot within 1½ to 2 seconds of a patrol car stopping near him at a park in Cleveland on Saturday. It shows the boy reaching in his waistband for what police discovered was a pellet gun that shoots non-lethal plastic projectiles. He died the next day.

Tamir’s family said in a statement released by their attorneys that they hope Cleveland police and Cuyahoga County prosecutors “thoroughly examine” what happened at the park that day.

“It is our belief that this situation could have been avoided and that Tamir should still be here with us,” said the family. “The video shows one thing distinctly: the police officers reacted quickly.”

The patrol officer who shot Tamir was identified Wednesday as Timothy Loehmann, a 26-year-old rookie who began his career in Cleveland on March 3. He previously spent five months in 2012 with a department in suburban Independence, but four of those months were in that city’s police academy.

Loehmann’s partner that day was identified as Frank Garmback, 46. He has been with the department since 2008. Both are on paid administrative leave pending a decision by the Cuyahoga County prosecutor’s office whether to pursue any criminal charges.

Much of the video footage shows Tamir alone in a park on an unseasonably warm November afternoon. He is seen pacing, occasionally extending his right arm with what appears to be a gun in his hand, talking on a cellphone and sitting a picnic table with his head resting on his arms.

The gun wasn’t real. It can be bought at sporting goods stores for less than $20. Tamir’s was lacking the orange safety indicator usually found on the barrel and, from a distance, was indistinguishable from a real firearm.

At one moment, Tamir is sitting at a picnic table in a gazebo. He stands and a police car zooms into the frame from the right and stops on the grass, just a few feet from Tamir. The passenger door opens and Loehmann shoots Tamir before Garmback can get out the driver’s side door.

It’s unclear how far Tamir was from Loehmann when the officer shot him, but Deputy Chief Ed Tomba said Wednesday that it was less than 10 feet.

The low-resolution video shows Tamir reaching to his waistband and then bending over after being shot. His body is mostly obscured by the patrol car when he falls to the ground. Garmback can be seen walking around the car and kicking what is said to be the airsoft gun away from Tamir.

Tomba told reporters at a news conference Wednesday that an FBI agent who was working a bank robbery detail nearby arrived within a few minutes and administered first aid to Tamir. Paramedics arrived three minutes later. The boy died on Sunday at a Cleveland hospital.

Tomba said the city was releasing the video at the behest of Tamir’s family.

On Saturday, a person had called 911 about a male pointing a gun at others at the park. The caller told the 911 dispatcher that the gun was “probably fake,” then added, “I don’t know if it’s real or not.”

Tomba would not discuss statements the two officers gave after the shooting, saying they were part of the investigation. Nor would he discuss details of the radio conversation between the officers and a dispatcher except to say they were apprised that they were on a “gun run.”

David Malik, one of the attorneys representing Tamir’s family, said Wednesday that he hoped the shooting of Tamir would lead to reform. He cited Cincinnati, where he said the police department, police union and the community worked collaboratively.