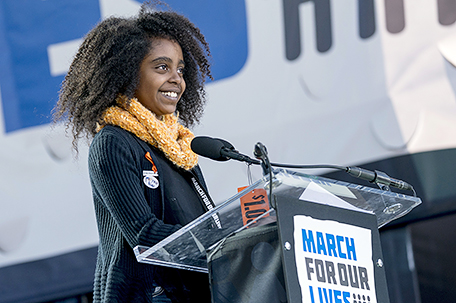 Naomi Wadler — the 11-year-old activist who delivered a poignant speech at the March for Our Lives demonstration in March — received a major honor from the NAACP at this year’s Convention in San Antonio.

Wadler was recognized by the organization for her efforts to bring attention to the lack of concern for Black women and girls who have lost their lives to gun violence, the organization reported.

Wadler — along with other women who have been fierce advocates for social justice and trailblazers who have broken barriers for women of color across different industries — was celebrated at the Women in NAACP (WIN) Empowerment Brunch in San Antonio, Texas.

Wadler hasn’t even entered her teenage years yet, but she has been widely recognized for bringing attention to one of America’s most pressing issues: gun violence. Following the mass shooting that occurred at Parkland High School in February — which claimed the lives of 17 individuals — Wadler organized a walk out at George Mason Elementary School in Alexandria, V.A. to protest gun laws.

A month later, she stood before thousands of demonstrators in Washington, D.C. to speak about gun violence and pointed out that the stories of women of color affected by it are often overlooked and forgotten about.

Since delivering that speech, Wadler garnered attention from major media outlets including Huffington Post, BBC, The Guardian, and Elle.

Dr. Christine Darden — a retired NASA Aerodynamics Engineer whose story was highlighted in ‘Hidden Figures’ — will also be honored during the brunch.