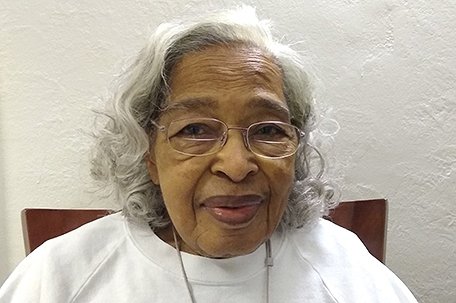 Nash and her family celebrated with the staff and residents at a birthday party held at The Hickman Friends Senior Community of West Chester where Nash lives.

Spending much of her young life in Greensboro, NC, Nash found her way to Stamford, CT where she met the love of her life, Wilson Nash, through mutual friends. The same mutual friends later introduced the couple to civil rights activist, Rosa Parks. The couple was married in 1948 and raised one son, Kevin.

The Nashs were hardworking Americans who had industrious and long served careers. Wilson was a Navy veteran, with an honorable discharge and worked in the shipping department as a painter for 40 years at American Cynamid in Stamford, CT. Myrtle Nash spent her career as a beloved and loyal domestic worker to many families in the Connecticut area.

According to her son, Kevin, “She nurtured them for over 40 years and became a treasured member of their families.”

Myrtle Nash was an award-winning bowler participating in many tournaments across North America and Hawaii, with various leagues. She won many team and individual trophies which are proudly displayed at The Hickman.

As for other hobbies, Myrtle loved to garden almost as much as she enjoyed being an active member of her church.

Myrtle’s son lived in the West Chester area at the time of his father’s passing in 1997. He encouraged his mom to live closer to his family in a senior care facility. Having professionally photographed The Hickman, he was familiar with the expert care and sincere companionship his mom would receive.

“[My mom] moved to the Hickman in June of 2001, and she made friends very easily there with residents, staff, and members of the outside community” Kevin recalled. “[The Hickman] felt like home. And she loved the tunnel connecting the buildings.” referring to the almost 100-year-old passage that some believe to be haunted. The candle lit channel was constructed to join the beloved 1896 Sharpless-Hall Building to the ‘new’ Hickman building built circa 1930.

Mrs. Nash is most proud of her family. Her grandson, Elan Nash, graduated from the U.S. Naval Academy in 2020. 1st Lt. Nash, USMC is one of only five active-duty African American Marine jet pilots today. He will earn his wings after completing jet pilot training.

For the special occasion, Myrtle Nash’s family and friends, her son, Kevin and daughter-in-law, Randi gathered for this unique tribute. Mayor Lillian DeBaptiste issued a centenarian proclamation which was presented to Mrs. Nash by Toni Kelly, Executive Director.

Edna Wooden honored on the occasion of her 100th birthday