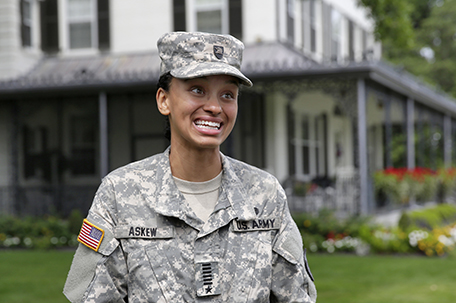 ABOVE PHOTO:  FILE – Cadet Simone Askew, of Fairfax, Va., who has been selected first captain of the U.S. Military Academy Corps of Cadets for the upcoming academic year, answers questions during a news conference, in West Point, NY. Askew earned another prestigious honor Sunday, Nov. 19, when she was one of 32 Americans awarded Rhodes scholarships to study at Oxford University in England. (AP Photo/Richard Drew, File)

The latest group of U.S. Rhodes scholars includes 10 African Americans – the most ever in a single Rhodes class – as well as a transgender man and four students from colleges that had never had received the honor before.

The Rhodes Trust on Sunday announced the 32 men and women chosen for post-graduate studies at Oxford University in England. Among them: the first Black woman to lead the Corps of Cadets at West Point; a wrestler at the Massachusetts Institute of Technology who’s helping develop a prosthetic knee for use in the developing world; and a Portland, Oregon, man who has studied gaps in his hometown’s “sanctuary city” policy protecting immigrants in the country illegally from deportation.

“This year’s selections – independently elected by 16 committees around the country meeting simultaneously – reflects the rich diversity of America,” Elliot F. Gerson, American secretary of the Rhodes Trust, said in a news release announcing the winners Sunday. “They plan to study a wide range of fields across the social sciences, biological and medical sciences, physical sciences and mathematics, and the humanities.”

The scholarships, considered by many to be the most prestigious available to American students, cover all expenses for two or three years of study starting next October. In some cases, the scholarships may allow funding for four years. The winners came from a group of 866 applicants who were endorsed by 299 colleges and universities. Four of the institutions had winners for the first time: Hunter College at the City University of New York; Temple University in Philadelphia; the University of Alaska in Anchorage; and the University of Maryland, Baltimore County.

The 10 African- Americans in the class include Simone Askew, of Fairfax, Virginia, who made headlines in August when she became the first Black woman to serve as first captain of the 4,400-member Corps of Cadets at the U.S. Military Academy – the highest position in the cadet chain of command at West Point. Askew, a senior, is majoring in international history, focused her undergraduate thesis on the use of rape as a tool of genocide and plans to study evidence-based social intervention at Oxford.

Her mother told reporters over the summer: “That leadership is something I’ve seen throughout her life – wanting to be first, wanting to be the best, wanting to win, in sports, in academics, in every aspect of her life. … And to serve others, as well.”

Several of the winners have devoted efforts to racial, social and economic justice. 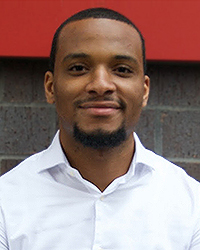 Hazim Hardeman is a 2017 magna cum laude graduate of Temple University, and the first student in Temple’s history to receive the honor. He will pursue his studies in sociology or political theory next fall at Oxford University in England. He grew  up  four  blocks  from  Temple;  his  single mother  found  a  way  to  enroll  him  in  a  better elementary school two hours away by public transportation, but he had to return to his inner city  high  school.  From there, he attended the Community College of Philadelphia, where  he graduated  with  High  Honors.  His  research  interests  include  critical pedagogy,  race  and politics,  and  African-American  intellectual  history.  He  has  written  on  hip-  hop  music,  gun control, and  the  prison  abolition  movement.  He  is  a  substitute  teacher  in  the  Philadelphia School District,   was a fellow in the Philadelphia Mayor’s  Office  of  Community Empowerment,  and  took  a  course  on  death  and  dying  with  inmates  in a prison  hospice program. He explains that “arriving at truth through letting suffering speak” has been a guiding ideal. Hazim intends to do the M.Sc. in Higher Education at Oxford.

Harvard College senior Tania N. Fabo, of Saugus, Massachusetts, created and codirected the first Black Health Matters Conference at the university.  An immigrant who was born in Germany to Cameroonian parents, she plans to research oncology at Oxford.

“I’m still kind of in shock,” Fabo said Sunday. “When they told me on Saturday I didn’t really fully believe it.”

Samantha M. Mack, the first winner from the University of Alaska Anchorage, is an Aleut woman who was born in a remote village before her parents brought her to Anchorage for better educational opportunities. She studies political theory from an indigenous and feminist perspective.

Thamara V. Jean, of Brooklyn, New York, completed her senior thesis at Hunter College of the City University of New York on the Black Lives Matter movement. Jean is a child of Haitian immigrants, according to Debbie Raskin, a spokeswoman for Hunter College.

And JaVaughn T. “J.T.” Flowers, who graduated this year from Yale University with a degree in political science, helped start an organization at Yale that provides mentors, tutors and summer stipends to make sure low-income students receive the same academic opportunities as others. Flowers has also examined gaps in Portland’s sanctuary city policy. After graduating, he returned to Portland to work in the field office of Democratic U.S. Rep. Earl Blumenauer, who said Flowers has worked on a variety of issues, including on how high costs of phone or video calls in prisons not only rip off the inmates, but make it harder for them to keep in touch with their families and thus to readjust to society when they’re released.

“He’s just an outstanding candidate for the Rhodes,” Blumenauer said Sunday. “He’s a very quick study, very good with people, an incisive listener who is able to translate that back to people who contact him and to the staff in our office. We’re excited for him, and we’re excited for what he’s going to do when he’s back.”

Calvin Runnels, of Baton Rouge, Louisiana, is the second self-identified transgender Rhodes scholar from the U.S., following Pema McLaughlin, who was named a winner last year. A senior at the Georgia Institute of Technology, he has organized rallies in solidarity with the immigrant community and led efforts to increase the number of gender-neutral bathrooms on campus. Runnels will study biochemistry at Oxford. His research investigates the origin of the ribosome, which could provide insight into the origins of life, the Rhodes Trust said.

Matthew Chun, of Arlington, Virginia, the captain of MIT’s wrestling team, researches the impact of intellectual property law on innovation and has worked as a patent technology specialist. He leads a team designing the first prosthetic knee for use in the developing world. He plans to study jurisprudence at Oxford.

Also selected was an international group of scholars representing 64 different countries. About 100 scholars will be selected worldwide this year.

The scholarships are worth about $68,000 per year, according to the Rhodes Trust.

The first class of American Rhodes Scholars entered Oxford in 1904.