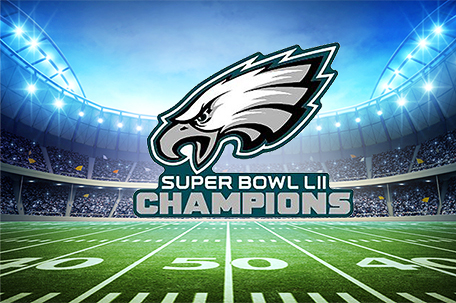 A first look at the Philadelphia Eagles tells me that there may be a parade in the city’s future.

I don’t usually make Super Bowl predictions at this time of the NFL year.

I’m also not like many of the “homers” and fans that want to start mapping out the Super Bowl parade route around here, whether the team really looks that good or not.

But when I look around the NFL, especially around the NFC, I think that your Philadelphia Eagles are going to get to the Super Bowl and win it. And this is coming from someone who doesn’t “Bleed Green.”

When I look at the Birds roster on both sides of the ball, I have to admit that they are loaded with the kind of talent and depth that leads me to believe that they are a legitimate contender to raise the Vince Lombardi Trophy for the second time in three years.

Granted, there have been times where the Eagles have been loaded with high-level talent and have gone nowhere. Y’all remember the infamous “Dream Team” of 2011 with guys like Nnamdi Asomugha and Vince Young. That team missed the playoffs and finished below .500. That team was seriously lacking in chemistry and some of those prized free agents didn’t live up to the lofty expectations put on them by fans.

And of course, this prediction must take injuries into consideration, because they’re always the big stumbling block to a team being fully loaded to make a Super Bowl run. For the last two seasons, quarterback Carson Wentz has not played a full 16-game season and has yet to play in the postseason.   That’s why I’m attaching a huge “if” to this column.

But if Wentz manages to stay on his feet for the whole season, there’s no reason the Eagles shouldn’t make that Super Bowl run. Offensively, Wentz has so many weapons at his disposal that the biggest competition won’t be against opposing defenses, but amongst his receiving corps.  When it comes to  wide receivers, the triple threat of Alshon Jeffery, DeSean Jackson and Nelson Agholor will give opposing defenses nightmares.

The key will be Jackson’s ability to stretch the field with his speed. At 32, Jackson is still a burner and throughout OTAs and at this point in training camp, he seems to have a solid rapport with Wentz.  Jackson’s speed will keep teams from doubling Jeffery, who wins more one-on-one battles against opposing defensive backs than he loses.  Agholor will definitely get his touches from the slot.

If you double down on the receivers, Wentz will have Zach Ertz, who caught over a 100 passes last season and second-year tight end Dallas Goedert, who caught 33 passes and scored four touchdowns.

Let’s not forget about the backs coming out of the Bird’s back field like Darren Sproles and Corey Clement, who will be used on third down situations in the passing game.

“When you can walk across the line of scrimmage and feel like you got a couple of winners either on the right or the left and you have about three or four, you hope that’s going to put you in a good position Sunday to complete balls and make plays,” said recently signed backup quarterback Josh McCown. “You got guys that can win against man coverage and also have their own niche and what they can do.”

The Eagles will come into the 2019 season with the best NFL’s best offensive line according to the website, Pro Football Focus.  If healthy, and that’s another huge if, the offensive line of left tackle Jason Peters, guard Isaac Seumalo, center Jason Kelce, Brandon Brooks and Lane Johnson will not only protect Wentz, but also open up holes for running backs Jordan Howard and rookie Miles Sanders.

That means that the Eagles will have the ability to put games away and take the pressure off Wentz with a solid running game.

If Peters or Brooks go down to injury, the Birds will have plenty of depth with rookies like first-round draft pick Andre Dillard. Peters said the younger players on the line are hungry and could be ready if necessary.

“Everybody’s getting better,” Peters said. “You have a lot of grinders. I like what I see out of those guys. When Lane and Brooks get back out there, you know what they’re going to do and that’s dominate at their position.”

On the defensive side of the football, the Eagles are stacked along the defensive line with veterans like Brandon Graham, Fletcher Cox, former Jacksonville Jaguar Malik Jackson and Tim Jernigan. When healthy, the Eagles will also have a lot of depth in the secondary, especially with guys coming back from injury.

The Birds will have Malcolm Jenkins and Rodney McLeod at the safety spots, as well as  Avonte Maddox, who played both the safety and cornerback positions when guys like Ronald Darby and Jalen Mills went down to injury. They also got outstanding performances from second-year corner Cre’Von LeBlanc.  Throw in other veterans like Rasul Douglas and third-year player Sidney Jones, and the Birds appear to have a lot of depth in the secondary.

The uncertainty for the Eagles defense will be at the linebacker position with the injury of middle linebacker Kamu Grugier-Hill, who is out with an MCL sprain, and Paul Worrilow. They will still have a Nigel Bradham who has proven that they he can play both inside and outside linebacker positions. But with the Birds emphasis on the defensive line bringing the heat on the quarterback, the Eagles will still be a tough team to beat.

My prediction is that the Eagles will win the NFC East because the Washington Redskins and New York Giants are not good at all. The Dallas Cowboys would probably be a favorite to win the NFC East, but the distraction regarding Ezekiel Elliott’s hold out could escalate to the point to where it could quite possibly wreck the Cowboys’ season.

The only two teams in the NFC giving the Birds any trouble are the New Orleans Saints and the Los Angeles Rams, last year’s participants in the NFC championship game. I think the Eagles have the offensive power to keep up with both teams and can defeat them.

This Eagles team has the potential to be better than the team that beat the New England Patriots two years ago. If they can stay healthy and can stay out of themselves, the Lombardi trophy is there for the taking.