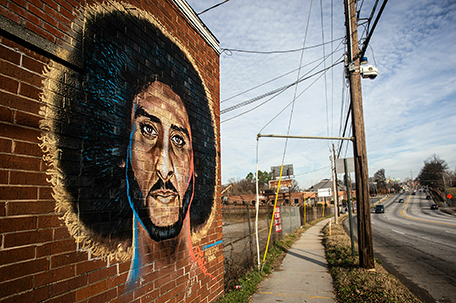 ABOVE PHOTO: A mural depicting embattled NFL quarterback Colin Kaepernick is seen on a wall on Monday, Feb. 4, 2019, in Atlanta. Several such murals were hastily painted over the weekend across the Super Bowl host town in protest after one that had stood for two years was abruptly demolished on the eve of the big game. (AP Photo/ Ron Harris)

“We lost because my guys didn’t stand up with me and I can’t make any excuse for them. Had we shown any amount of solidarity, if the superstars had stood up and said we’re with Curt Flood. If the superstars had walked into that courtroom and made their presence known, I think that the owners would have gotten the message and given me a chance to win that.”

I start this column with the above quote as the nation is reeling from demonstrations and riots after the tragic death of George Floyd, an African American who was unjustly strangled to death by Minneapolis police officer Derek Chauvin despite his desperate plea of “I can’t breathe.”

I was moved by the Twitter comments of Philadelphia Eagles quarterback Carson Wentz, who expressed a sadness felt by many: “All I know is that the institutional racism in this country breaks my heart and needs to stop. Can’t even fathom what the Black community has to endure on a daily basis.”

Throughout the NFL, several high-profile White players including six-time Super Bowl champion Tom Brady and Joe Burrows, the Cincinnati Bengals No. 1 draft pick and 2019 Heisman Trophy winner, have expressed empathy for what happened in Minneapolis.

But then, I flashed back to the 2016 season when former San Francisco 49ers quarterback Colin Kaepernick was taking a knee during the national anthem to protest police brutality and raise awareness of systemic racism. None of those White players, with the exception of players like Eagles defensive lineman Chris Long, were vocally supporting Kaepernick’s protest.

I wonder what would have happened if other higher-profile white superstars had come out for Kaepernick? Would he have gotten another job?  Hmmm. What if New Orleans Saints quarterback Drew Brees had really understood why Kaepernick was protesting instead of just coming out against it?

Kaepernick’s protest, while supported by a few players (both Black and White), was not only vilified as being anti-American, anti-flag and unpatriotic by a large number of White fans who expressed their rage in a variety of ways including burning his jersey.

On top of that, the Idiot-in-Chief, President Donald J. Trump, felt the need to gin things up by calling for retribution against the players engaging in anthem protests. While speaking at one of his infamous rallies, Trump said of Kaepernick,: “Get that son of a b***h off the field right now, he’s fired.”

Even more troubling was that more than a few NFL executives branded Kaepernick as a traitor and made sure that he would never get another job with an NFL team for daring to bring awareness to systemic racism in America.

Joe Lockhart, who served as the NFL’s executive vice president in charge of communication and government affairs, said in a piece on CNN.com that the owners felt Kaepernick’s protest was “bad’ for business. Despite efforts by NFL Commissioner Roger Goodell to persuade the teams to sign Kaepernick, the owners were dedicated to keeping him out.

“That symbol of racial injustice was reinforced every day that Colin sat on the outside of the football world,” Lockhart wrote. “It may have seemed like a good business decision for the clubs not to sign him and it certainly wasn’t illegal, but it was wrong.”

Unfortunately, it took another unnecessary, on-camera death of another Black man at the hands of a police officer to get some of the NFL’s white players to understand why Kaepernick was taking a knee.

I am hoping that the unrest in cities from Philadelphia to Salt Lake City will finally bring the owners to their senses and get them to acknowledge that the blackballing of Kaepernick was morally wrong and unfair. Given that 85% of the NFL’s players are African Americans, isn’t silence in the face of bigotry and systemic racism also bad for business?

Goodell and the owners need to do what they did for Michael Vick when he was let back into the league after being suspended for dogfighting. Vick not only owned up to his transgressions, but he also became a part of solving the problem by becoming an anti-dog fighting advocate.

The NFL, led by Goodell and the owners, needs to acknowledge that keeping Kaepernick out of the league was wrong and give him a real opportunity to resume his career.

But more importantly than that, the NFL has to show some respect for its mostly Black workforce and the league’s Black fans by truly involving themselves in the fight to end systemic racism in America instead of just throwing money at the problem.

Because whether they like it or not, the NFL needs to recognize that unlike appeasing an angry player with an incentive laden contract, the problem of systemic racism won’t be solved by throwing money at it.