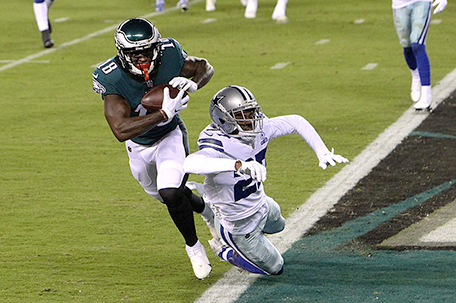 The Philadelphia Eagles are in first place. But problems still persist, especially with the offense.

Given the sorry state of the NFC East, the Philadelphia Eagles are the best among the worst and have an excellent opportunity to win the division.

And given how woefully awful this division is, that might not be saying much. Nevertheless, the Eagles managed to come away with a 23-9 win over a grossly undermanned Dallas Cowboys squad featuring a rookie quarterback making his first start behind a banged up offensive line.

Birds quarterback Carson Wentz had another mediocre performance for a guy who is paid like an elite quarterback. He was 15-of-27 for 123 yards with two touchdown passes, two interceptions, and two fumbles against a Cowboys defense that was giving up 34 points per game coming into Sunday’s game.

“I’m pumped that we’re at the top of our division, that we’re heading into this bye week,” said Wentz, who had a quarterback rating of just 61.2. But halfway through the year I know I can play better and a lot of it’s just coming down to taking care of the football.”

On one hand, the Eagles (3-4-1) should be happy with the win because it solidifies their hold on first place in the NFC East. It’s also good to get a win going into the bye-week where maybe they can figure out why the offense has been so inconsistent and has had a terrible penchant for turning over the ball.

“We’ve got to get better. We’ve got to fix it. We’ve got to fix it in a hurry,” Eagles head coach Doug Pederson said. “We’ve got a chance to sit back and look at the first eight games and evaluate and try to come away with some ‘whys.’ But we just can’t keep turning the ball over and shooting ourselves in the foot, things we’ve got to clean up in the second half of the season.”
The Eagles defense did what it was supposed to do to a football team that was playing with offensive linemen with limited experience and a totally inexperienced quarterback. They smothered them.

Rookie quarterback Ben DiNucci, a seventh-round draft pick out of James Madison, was sacked four times by the Eagles defense, which also forced two fumbles including one that was returned for a game-clinching touchdown by safety Rodney McLeod late in the fourth quarter.

Although Dallas forced four Eagles turnovers, including a pair of interceptions by quarterback Carson Wentz, the Birds defense held the Cowboys to just three field goals and there was no imminent threat of Dallas, who actually led 9-7 at halftime, walking out of Lincoln Financial Field with a win.

“We were trying to knock the ball out of (DiNucci’s) hands,” said Eagles defensive end Brandon Graham. “We had to make sure we stayed in his face. We had to put those fires out. We held strong while our offense was struggling.”

For the second straight week, Wentz’s sloppy performances have been covered up by the defense and by playing terrible teams in their division. Of course, you have to take into consideration the roles that injuries have played in the inconsistency of the offense.

That said, Wentz can’t keep performing like this and expect to lead a team beyond the first-round of the playoffs. The Eagles have played like the football equivalent of the eight seed in the NBA playoffs; a team that barely got there and is usually swept in the first round.

“I’m not good enough,” Wentz said. “I’m pumped we got the win, but I’m going to have to watch the tape and I’m a little frustrated with how I played and how we’ve left some plays out there, left some points out there, and missed some big opportunities. I can be better. I know I will be. I would say the same thing for this far in the season.”

The Eagles will next take the field against another woeful representative of the NFC East, the New York Giants, on Sunday, Nov. 15 at 1pm.