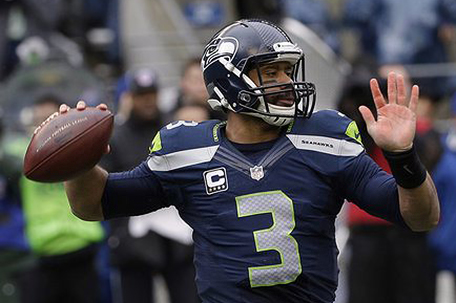 ABOVE PHOTO:  Russell Wilson launching his game-winning overtime touchdown pass to Jermaine Kearse to send the Seattle Seahawks to the Super Bowl.  (Photo courtesy of the StarTribune.com)

“If you can trust yourself when all men doubt you, but make allowance for their doubting too. … If you can fill the unforgiving minute with 60 seconds’ worth of distance run…Yours is the Earth and everything that’s in it, and which is more, You’ll be a man, my son.“

As the confetti flew all over Seattle’s Century Link Stadium, Seattle Seahawks quarterback Russell Wilson had tears of joy streaming down his face as his teammates gathered around him. Thanks to a 35-yard touchdown pass in overtime to wide receiver Jermaine Kearse, the Seahawks will be heading to Arizona to defend their Super Bowl crown as NFC Champions.

With the touchdown pass to Kearse, Wilson pulled off the mother of improbable comebacks in a 28-22 victory over the Green Bay Packers.

“(Wilson) did a remarkable job with the finish of this game,” Seattle head coach Pete Carroll said. “It took so long for the good stuff to happen. It was a long, hard day for him. We were throwing for nothing. I think 10 yards at halftime. It was a crazy game. But with the game on the line, this is what (Wilson) has totally believed would happen and he never thought that it wouldn’t.”

Seattle will head to Super Bowl XLIX to take on the New England Patriots at University of Phoenix Stadium in Glendale, Arizona. The Pats punched their ticket to the Super Bowl with an easy 45-7 win over the Indianapolis Colts in the AFC Championship game.

Wilson’s happy tears were perilously close to being sad and somber ones. He had been sacked five times, and threw four interceptions, including what looked to be a game-clinching pick for the Packers with 5:13 left. But out of the ashes of what was a terrible game for him, Wilson found a way to win.

Wilson fought through his mistakes and was great he needed to be, especially in the last 3:52 of regulation and in overtime. What was most impressive was the fearlessness he displayed down the stretch. He wasn’t afraid to make a mistake after four picks and he kept firing until he got it right.

“If we’re going to down, I’m going to go down swinging, that’s for sure,” Wilson said.

Not only did Wilson believe in himself, he still had faith in his teammates, especially Kearse. Two of Wilson’s interceptions came off catchable balls that caromed off Kearse’s hands. Wilson never wavered in his belief that Kearse would come through with a big catch.

“Because I’ve seen him make so many plays before, the first thing I told Kearse after that last interception is we’re going to win this game and I’m going to keep coming back to you, we’re going to find a way to win the game,” Wilson said. “When I found a chance to hit Jermaine one-on-one on that deep post, we went for it and we hit it.”

During those times that Wilson and the offense struggled, the defense kept the Packers from turning the game into a rout in the first half. Green Bay had the ball inside the red zone four times in the first quarter and came away with just one touchdown and three field goals to take a 16-0 lead.

The special teams came up with a pair of huge big plays for the Seahawks and put them in position to win the game. Seattle got their first score of the game in the third quarter on a fake field goal. Punter Jon Ryan threw a 19-yard to pass to tight end turned offensive tackle Garry Gilliam.

After a one-yard touchdown run by Wilson brought the Seahawks to within five,19-14, reserve wide receiver Chris Matthews recovered Steve Hauschka’s onside kick that led to a spectacular 24-yard run by Marshawn Lynch that gave Seattle its first lead of the game.

Speaking of “Beast Mode,” Lynch gained 157 yards on 25 carries and that spectacular run for his touchdown.

After Lynch’s score, Wilson made another improbable play on the two-point conversion when he sprinted to his right and floated a ball up for grabs to his left that was miraculously caught by tight end Luke Willson to give Seattle a 22-19 lead.

That play was important because Green Bay would tie the game and send it into overtime on a 48-yard field by Mason Crosby.

Once the Seahawks won the coin toss, Wilson knew he had the Packers right where he wanted them.

“I told (offensive coordinator) Darrell Bevell on the sideline after that coin toss, I’m going to hit Kearse with a touchdown on a check,” Wilson said.