Will three be the charm with top picks from NBA Draft for Sixers? 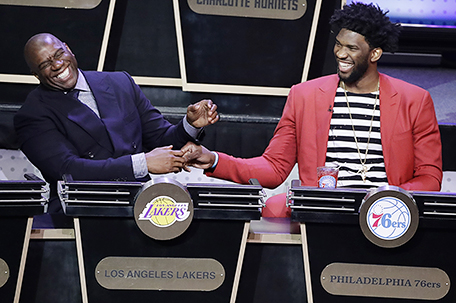 ABOVE PHOTO:  Magic Johnson, president of basketball operations for the Los Angeles Lakers, left, and Philadelphia 76ers’ Joel Embiid, right, share a laugh as the results of the NBA basketball draft lottery are announced, Tuesday, May 16, 2017, in New York. (AP Photo/Frank Franklin II)

Although they showed some signs of life last season, the Philadelphia 76ers are still a work in progress, and are still a few pieces short of being playoff contenders.

Thanks to their luck with the NBA Lottery ping-pong balls, the Sixers will have the possibility of getting one of those pieces with the third pick in the 2017 NBA Draft on June 22nd.. For the fourth straight year, the Sixers will have a top-five pick to add to the group of emerging stars it’s been amassing, one of which was Joel Embiid, the team’s representative at the Draft Lottery.

The Sixers last three picks have netted them Embiid, Jahlil Okafor and Ben Simmons. Of that trio, only Okafor actually played during his rookie season, while Embiid and Simmons spent their first seasons on the bench nursing injuries.

The biggest need the Sixers have is at both guard spots. Even with the possibility of the 6-10 Simmons playing at the point guard spot, the 76ers could use a point guard. They could also use a good shooting guard as well. If they can find a guard who can score and run the offense, the Sixers would be cooking with gas.

Some of the online mock drafts are projecting the Sixers to be in the market for a shooting guard/small forward.  One player that seems to jump out on more than a few mock drafts is Kansas star Josh Jackson.

At 6-8, Jackson is a long, lean versatile player who can create his own shot and take you an opposing defender off the dribble. During his only season with the Jayhawks, he averaged 16 points, 7.4 rebounds and three assists per game. He shot 37 percent from three-point range and 51 percent from the field overall.

What would probably make Jackson palatable to Brett Brown’s scheme of things is ability to play defense, averaging 1.5 blocked shots per game. The website, NBADraft.net, said that Jackson is an “extremely disruptive defender … He’s not the type of defender that merely hinders his opponents ability to score, he’s deadly in the passing lanes and is aggressive trying to steal the ball and deflecting passes.”

In Brown’s world, solid defense like that leads to points in transition and when you have young players that like to play the transition game, adding a young player like Jackson who likes to play defense could make the 76ers more fun to watch.

NBADraft.net also described Jackson, a player that the site compares to Kawhi Leonard of the San Antonio Spurs and Jimmy Butler of the Chicago Bulls, as a player with a blue-collar work ethic who doesn’t come off as a prima donna.  That’s something that would endear him to Philly sports fans if he’s drafted.

But if Jackson does have a weakness, it’s at the charity stripe. He shot just 56 percent from the free throw line during his freshman year at Kansas. The thing remember there is that he was a freshman. That’s something he can work on with time.

Another intriguing shooting guard in this draft that the Sixers might consider is Kentucky’s Malik Monk (6-3, 200). During the NCAA Tournament, it was Monk’s performance that upstaged UCLA’s highly-touted guard Lonzo Ball in the South Regional Semifinal. In that game, he scored 21 points and hit several clutch three-pointers.

In Kentucky’s regional final loss to North Carolina, Monk hit a game-tying three-point bucket with under 10 seconds. Unfortunately, the Tar Heel won the game with a clutch jumper of their own.

Monk averaged 19 points per game and shot 40 percent from three-point range. He’s a decent defender who plays bigger than his height and could struggle against bigger shooting guards on the defensive end, according to NBADraft.net.

It’s nice to see that the Sixers have choices, and that they’re good ones, but it’s going to depend on who is left on the board and what’s available to the team.