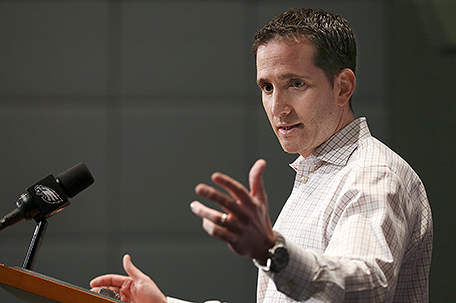 While it’s way too early in the season to tell whether or not General Manager Howie Roseman’s personnel moves during the offseason are going to pay off big for the Philadelphia Eagles, what’s clear is that he’s undone just about everything former head coach Chip Kelly did.

The latest, and perhaps the most important of these moves is the recent signing of defensive end Fletcher Cox. Cox’s six–year contract extension is worth $103 million ($63 million guaranteed) and allows the team to hang on to a great defender coming off of an all-pro season.

Last season, Cox had a career-high 9.5 sacks. In four years with the Eagles, he’s had  22 career sacks, five forced fumbles, and six fumble recoveries. He also has 212 total tackles.

Cox was a  bright spot on a defense that struggled to stop teams from moving the football up and down the field. The Birds ranked 30th in yardage allowed. They also ranked 28th in passing yards allowed and last in rushing yardage allowed.

With the Eagles playing in a 4-3 defense under defensive coordinator Jim Schwartz, Cox will probably be moved to defensive tackle.  If he can generate a pass rush as a defensive tackle, the Eagles will be a tough team to beat on defense. Of course, other parts of the defense have to come together as well.

Roseman and the Eagles front office have been very busy this off-season. Every player the Birds picked up through the draft or free agency fulfilled a need at some positions they struggled with the previous year.

In the NFL Draft, Roseman wheeled and dealed his way to getting the second pick in the NFL Draft—former North Dakota star Carson Wentz.  The good part about this pick is that Wentz isn’t going  to be thrown out to the wolves in his rookie season because quarterback Sam Bradford was signed to a two-year deal that will allow Wentz to learn the game.

Sure, drafting Wentz led to Bradford demanding to be traded, but after talking to head coach Doug Pederson, figuring out that he was going to make $22 million this year, and because he probably realized that the Eagles were probably the only team willing to make him their starter, Bradford eventually backed down and, for now anyway, appears to be all in.

To me, the most important thing that Roseman did this off season was stock up on offensive linemen.

In the secondary, the Birds picked up a pair of new corners— Leodis McKelvin and Ron Brooks, both of whom played for the Buffalo Bills when Schwartz was the defensive coordinator. The Birds also picked up former LSU safety Jalen Mills and former Rams safety Rodney McCleod.

The Eagles still have some uncertainty at the inside linebacker position and at this point, it’s anyone’s guess who’s going to emerge as the team’s starting running back. The Eagles did draft West Virginia’s Wendell Smallwood in the sixth round, but  is he good enough to beat out a veteran Ryan Mathews?

Of course, none of  Roseman’s offseason moves will mean anything if they don’t translate into W’s.

But for Eagles fans still smarting from Chip Kelly’s sometimes head scratching personnel moves, it would appear on the surface that the Birds are heading in the right direction.