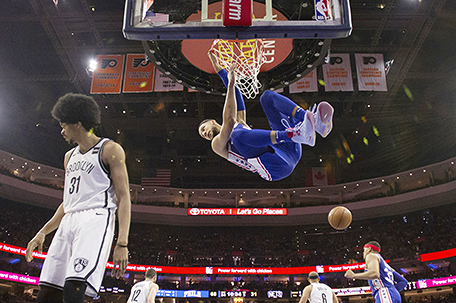 ABOVE PHOTO: Philadelphia 76ers’ Ben Simmons, top, of Australia, dunks the ball as Brooklyn Nets’ Jarrett Allen, left, looks away during the second half in Game 5 of a first-round NBA basketball playoff series, Tuesday, April 23, 2019, in Philadelphia. The 76ers won 122-100. (AP Photo/Chris Szagola)

The Philadelphia 76ers once again find themselves in the second round of the NBA Playoffs with a higher ranked opponent. They’re hoping for a different result.

The Philadelphia 76ers are back in a familiar position.  They have advanced to the Eastern Conference semifinals after demolishing the under-matched Brooklyn Nets in five games.

If that sounds familiar, it’s because it is. Last season, the Boston Celtics came into the season’s second round series having dominated the Sixers in a similar fashion. Game One of the best of seven Eastern Conference semi-final series begins Saturday at Scotiabank Arena in Toronto and will be broadcast on TNT.

The one thing that Sixers fans can hang on their hats on is that both teams have undergone some changes since they last met. The 76ers hadn’t acquired Tobias Harris, and Marc Gasol hadn’t yet become a Raptor.

Because of those changes, you might want to throw out the record, Sixers coach Brett Brown said.

“We all know what the math says with our success in Toronto and It’s not flattering, but it’s also not directed to the team we have,” Brown said. “And so you can credit or discredit. I’m discrediting it. I think that we have a new group, we have a new opportunity. I’ve got tremendous for the Toronto team. Their coaching staff has done great. We’re excited to go up there and try to fix some of what the math says about our lack of success.”

If anything, the Sixers do have the firepower in their starting lineup with center Joel Embiid, guard Ben Simmons, Jimmy Butler, J.J. Redick and Tobias Harris. It’s arguably one of the best starting fives in the NBA.  Embiid said the Sixers are a better team than they were last season and is confident that they can go to the NBA Finals.

“Man, we feel pretty good about what we can do,” Embiid said. “I feel like this team is better than last year’s team. Last year, we came into the playoffs with momentum and Boston just smacked us. Last year, we were overconfident, but this year it’s about respecting everything about the game of basketball and putting the work in.”

But the big question for the Sixers is the health of Embiid, who has been nursing a sore left knee. If he’s healthy and on the floor for every game, the 76ers will be difficult to beat on both ends of the floor.

Of course, the big question for the Sixers is whether they can clamp down on the Raptors on the defensive end, especially Kawhi Leonard, who has killed the Sixers in Toronto’s three wins this season. In fact, Leonard, one is considered by more than a few observers to be one of the best players in the league, scored more than 30 points in two of those three wins and averaged 30.3 points in the Raptors three wins.

In the Sixers lone win over Toronto, Leonard was out with an injury.

But Leonard is not the only member of the Raptors that will be attacking a Sixers defense. Former Cardinal Dougherty and Villanova star Kyle Lowery is also going to be tough to stop. He scored at least 20 points in two of those four games.

But Brown said his team has been playing well on the defensive end since their loss in Game 1 to the Nets.

“I mean I think it immediately  forced to us to realize that we are vulnerable if we don’t play defense the way we’ve got to play defense,” Browns said. “I thought we came together defensively.”