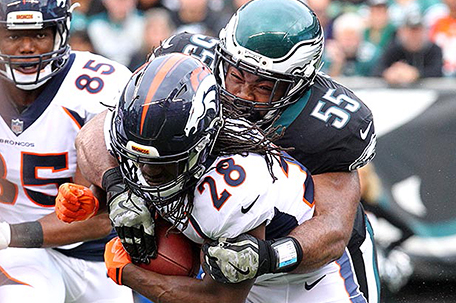 With the League’s Best Record, the Philadelphia Eagles are a legit Super Bowl Contender

Now that the Philadelphia Eagles have entered the bye-week of their 2017 season, it’s time to recognize that they’re a legitimate Super Bowl contender.

I know…That’s kind of hard to wrap your head around.

But it’s true. The Eagles are a legitimate Super Bowl contender.

If you look at the team’s current schedule and the lack of any other dominant team in the NFC, there’s a very distinct possibility that come January, there will be plenty of playoff football at Lincoln Financial Field.

In the team’s 51-23 victory over the Denver Broncos last Sunday, the Eagles looked like a team worthy of carrying the mantle of being the NFL’s best team going into the second half of the season.

The Birds dominated the Broncos in just about every facet of the game, rolling up 420 yards of offense and ending the competitive portion of the game by halftime. Quarterback Carson Wentz had another outstanding performance, throwing four touchdown passes and and going 15-for-27 passes for 199 yards.

Really. Think about it. At 8-1, the Eagles have the best record in and have eight totally winnable games ahead of them. When the team returns from the bye-week on Nov. 19, they head down to AT&T Stadium in Arlington, Texas to face the second place Dallas Cowboys (5-3).

The team is making a real effort not to look beyond that game.

“We come back from the bye on the road against Dallas on the road, in the division, so we don’t have much time to really look too far ahead,” Eagles safety Malcolm Jenkins said. “We’re looking forward to that matchup.” 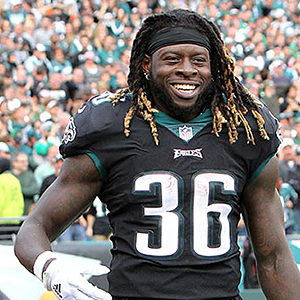 The Eagles probably won’t run the table. While the game is winnable, and the team isn’t the defensive juggernaut that won Super Bowl 48, the Seattle Seahawks are always tough at home. They could have their hands full with the surprising Los Angeles Rams, the team that’s currently occupying the top spot in the NFC West.

But the Eagles will probably be favored to win their games against the hapless New York Giants (1-7), the confusing Chicago Bears, and the underachieving Oakland Raiders (4-5).

“Well, my job is to make sure we stay focused and stay grounded,” he said. “We can’t get caught looking down the road at upcoming opponents and scenarios.”

The other first-place teams around the conference like the NFC North-leading Minnesota Vikings, the NFC South-leading New Orleans Saints, and the Rams might be good, but aren’t necessarily world beaters.

While the Eagles themselves aren’t making anyone forget the Pittsburgh Steelers of the 1970s, they have just as good a chance as any of the contenders I’ve already mentioned.

But they have to realize that with the best record in the NFL, teams will no doubt be gunning for them.

“When we come back our mentality to is turn it up more than we have,” Jenkins said. “It’s not about the start, it’s how you finish and real ball is played in November and December. We look at our schedule moving forward we’ve got some good teams and some games that we know are obviously very, very important for the long haul.”

Within the last couple of weeks, the Eagles have put all their chips on the table and they’re all in for a Super Bowl run. They acquired former Miami Dolphins running back Jay Ajayi, who paid dividends in his first game in an Eagles uniform. He gained 77 yards on just eight carries.  Against the Broncos, Ajayi broke off an electrifying 46-yard run for a touchdown.

“We were 7-1 when we made the trade,” Jenkins said. “I think everybody recognizes the opportunity we have right now.  For the last two years, (the Eagles organization, they’ve extended guys and they’ve brought in free agents—The desire is to win now … Jay Ajayi we think can help us over the long haul.”

So you might want to start saving your pennies for some playoff football at Lincoln Financial Field. You’re gonna need it.