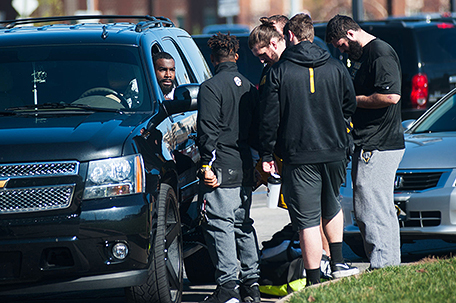 ABOVE PHOTO:  Former Missouri receiver L’Damian Washington, left, speaks with tailback Russell Hansbrough and other football players outside of the Mizzou Athletics Training Complex on Sunday, Nov. 8, 2015, in Columbia, Mo. Student protests over racial incidents on the campus escalated over the weekend when some football players announced they will not participate in team activities until the school’s president was removed.   (Nick Schnelle/Columbia Daily Tribune via AP)

When the University of Missouri’s football team decided to join their fellow students in protesting incidents of racism on campus, they got in the game—of life.

When I was a graduate student at Michigan State University in the late 80s, the school’s African American students occupied the school’s administration building for eight days to protest incidents of racism on campus that included some sick human being pinning a dead rat on the dorm room of the president of the campus’s branch of the NAACP.

But while groups of Black Spartans took to the streets in protest, Michigan State’s Black athletes were noticeably absent, probably because they feared losing their scholarships and because, well, fighting for the rights of their peers wasn’t their job…performing on the field and putting the ball in the hoop was.

Which is why what the University of Missouri football team did by joining #ConcernedStudents1950 and threatening to boycott the school’s game against Brigham Young University on Saturday, stands out.

For a lot of Black athletes on predominately White college campuses, racism is something that they hear about, but don’t really see themselves because, frankly, they’re segregated from the rest of the student body. With the exception of attending classes, African American athletes often have limited to zero social contact with their fellow Black students on campus.

But when the players found out what their peers were experiencing as #Mizzou students, things like racial slurs being hurled at the Black student government president and someone showing a true commitment to hate by using human feces to draw a swastika on a dormitory door, they decided to join hunger striker Jonathan Butler and his fellow students in calling for university president Timothy Wolfe’s resignation.

When this group of 30 athletes risked their scholarships and ignored the voices that said, “just shut up and play”, they took a real risk. When their White teammates and head coach Gary Pinkel joined them, and the specter of Missouri getting hit with a $1 million fine for not playing Saturday’s game, Wolfe and Chancellor R. Bowen Loftin resigned.

The WuTang Clan was right. Cash really does rule everything around us.

While there will be many battles ahead for the Black students at Missouri, it was refreshing to see to the African-American athletes assert their power in the fight for racial justice on campus. Because they’ve witnessed things like the death of Michael Brown 120 miles away from their campus in Ferguson, they’ve realized that their status as athletes will not save them from the realities of racism.

As part of the team’s statement announcing their boycott, they quoted King, saying “Injustice anywhere is a threat to justice everywhere.”

I think that Dr. King would have appreciated that.