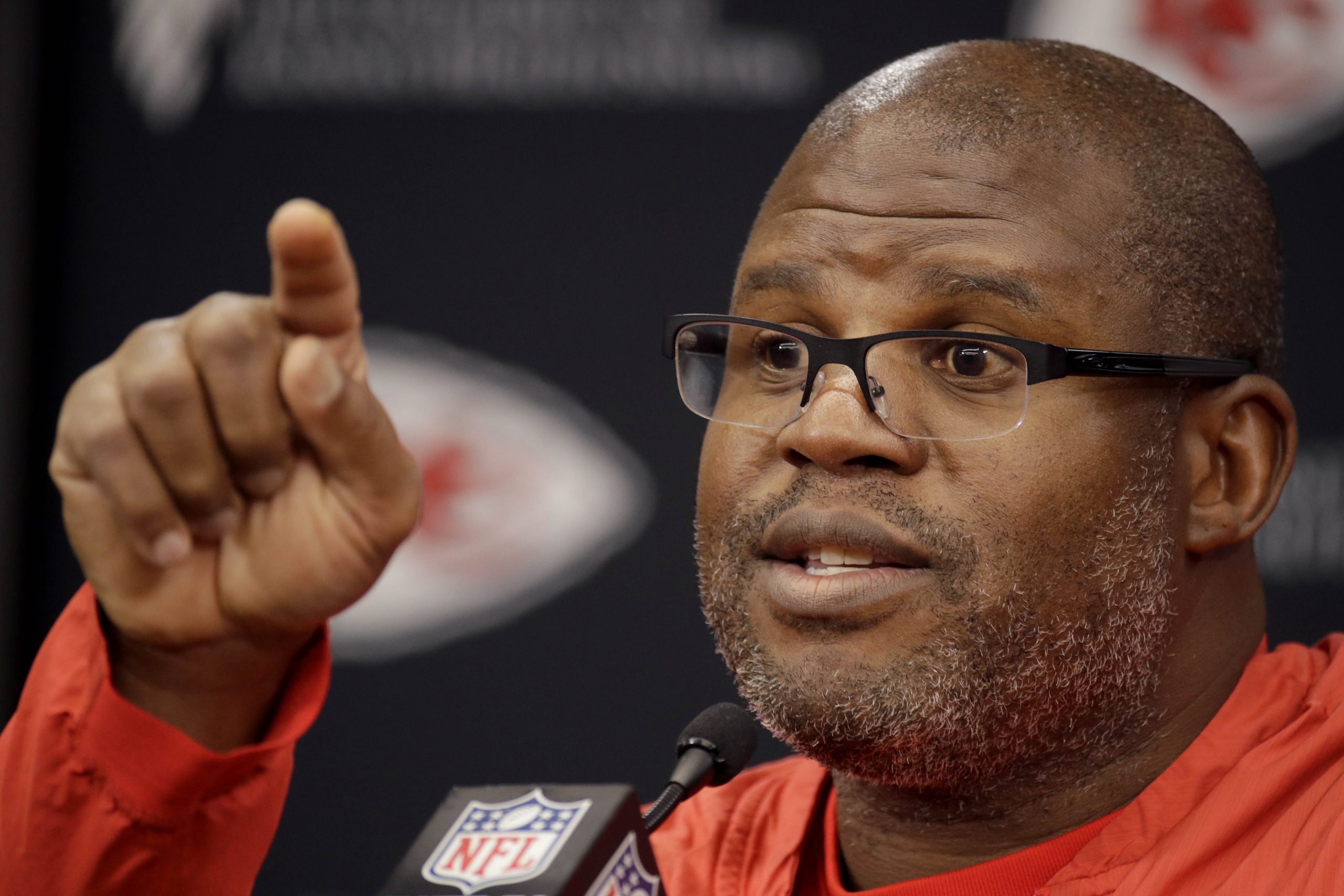 Photo above: Kansas City Chiefs offensive coordinator Eric Bieniemy addresses the media during an NFL football news conference at Arrowhead Stadium in Kansas City, Mo., in this Jan. 23, 2020, file photo. Bieniemy has become the cause celebre when it comes to minority assistants who have been denied the opportunity to become head coaches in the NFL. (AP Photo/Charlie Riedel, File)

For all of the NFL’s talk of supporting social justice and ending racism, the latest round of the league’s coaching carousel shows that the league isn’t entirely putting its money where its mouth is.

During the hype and hoopla of the Super Bowl LV pre-game show, I noticed Alicia Keys singing, “Lift Every Voice and Sing,” otherwise known as the Black National Anthem.

Now, don’t get me wrong. I love Alicia Keys’ music and revere the stirring words of James Weldon Johnson. But because of the NFL’s conduct when it comes to hiring head coaches, I couldn’t help but look at this with a generous amount of cynicism.

Although the NFL had signs in stadium end zones saying “End Racism” throughout this season and has talked a really big game in terms of diversity and social justice, you can’t help but notice the rank hypocrisy of it all when you look at the league’s head coaching ranks. At the end of the 2020 season, you had seven head coach openings and only one went to an African American candidate, despite there being more than a few qualified Black candidates for those positions.

In the last three coaching cycles, only two of the 20 coaches hired by NFL teams has been African American. What makes the snub Black coaches have received even more insulting this year is that the Super Bowl featured four Black coordinators.

Yet, no one thought that any of those guys were worthy of a head coaching job.

After watching the Buccaneers offense led by Leftwich and the defense led by Bowles totally dominate the Kansas City Chiefs on both sides of the ball, I dare any owner or football analyst tell me that those guys aren’t qualified to be head coaches.

And just because Bienemy’s offense was on the losing end of the score, his work making Patrick Mahomes and the Chiefs offense become one of the most potent in the NFL shouldn’t be negated when it comes to head coaching slots.

Because if these men were white, and had done what Bowles, Leftwich, Bienemy and even Frazier had done with the Buccaneers, Chiefs and Bills what these men had managed to do, NFL owners and GMs would forget that one of them had a rocky road as the head coach of the New York Jets and fall all over each other to get to them. For example, former New York Jets head coach Andrew Gase, the man who replaced Bowles in New York, by the way, got the job with despite finishing with a less than .500 record as the head coach of the Miami Dolphins.

At end of that season, both Shanahan and McVay were immediately hired. There was no scrutiny of their youth or their ability to lead a team. Shanahan’s Falcons team lost the Super Bowl, and he was criticized for a couple of questionable calls. But that didn’t stop him getting a head coaching job.

McVay’s Washington squad did not make the playoffs, but there was no doubting his qualifications or his ability to lead a team.

Despite two straight Super Bowls and developing the game’s brightest star and the league’s best offense, the excuse that’s most commonly given for not hiring Bienemy is that he reportedly doesn’t call offensive plays. Funny how that same excuse wasn’t trotted out when the Detroit Lions hired Dan “Bite some kneecaps!” Campbell, who was the Miami Dolphins tight end coach and, you guess it, didn’t call any plays.

But I’m not surprised. When it comes to hiring NFL coaches or front office people, the bar is constantly moved when it comes to putting Blacks in those roles.

If we lived in an ideal world, teams would be clamoring for the services of Bowles or Leftwich when the head coaching carousel starts turning again next year. But, we don’t live in an ideal world, so Bowles, Bienemy, Leftwich and Frazier will probably be on the outside looking in for whatever reason.

Hall of Fame head coach Tony Dungy, the first Black head coach to win a Super Bowl, wrote an open letter to the NFL that appeared on NBC Sports.com calling on the NFL to do a better job when it comes to hiring Black coaches.

“Are we to believe that you’re really doing exhaustive searches, trying to uncover the best coaches, but only two out of the last 20 years have been African Americans?” Dungy wrote in his letter.

That’s why I look at the NFL’s attempts at racial reconciliation through performative gestures such as public service announcements championing diversity and wearing the names of Blacks killed by police on the back of helmets through a jaundiced eye. Especially since this is the same league that would rather recycle mediocre white quarterbacks on a loop than bring back a Black quarterback who took his team to the Super Bowl because he dared to express his First Amendment rights during the Trump Administration.

So, NFL owners, spare us your piety, your diversity PSAs, and your performances of “Lift Every Voice and Sing” before games until you start putting your money where your mouth is as it pertains to your coaching and general manager ranks.

Because until then, these performative gestures don’t amount to a hill of beans.

And there are no amount of performances from Alicia Keys, Jazmine Sullivan, The Weeknd or even Beyonce’ that can change that.

Nourishment for the Soul: Your actions speak louder