What’s next unclear for Eagles 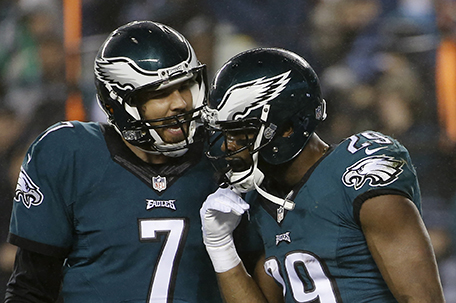 ABOVE PHOTO:  Philadelphia Eagles’ Sam Bradford, left, and DeMarco Murray celebrate after Murray’s touchdown in the second half of an NFL football game against the Washington Redskins, Saturday, Dec. 26, 2015, in Philadelphia.  (AP Photo/Michael Perez)

The Philadelphia Eagles cleared out their lockers earlier this week with a little more off-season uncertainty than usual.

In addition to wondering about contracts, how the season got away from them, and what’s next, the players went home without knowing who would be running the team from the sidelines next year now that the Eagles have parted company with head coach Chip Kelly.

By the end of the week, the Eagles had interviewed several candidates for the head coaching position including Chicago Bears offensive coordinator Adam Gase, who will reportedly have a second interview running backs coach Duce Staley and interim head coach Pat Shurmur.

If you’ve noticed, the one location for a coach at is in the collegiate ranks.

When it comes to head coaches, school’s out as far as owner Jeffrey Lurie is concerned.

The Birds are looking for someone who understands every aspect of the pro game beyond the Xs and Os, something that Kelly will hopefully have learned by the time he gets the pro gig he says he wants.

If anything, the Eagles will need to find a coach who can figure out how to maximize the talents of the players already on the roster, especially on the offensive side of the football.

While there were Eagles fans that were down on quarterback Sam Bradford and his suspect knees, he didn’t have a bad season at all.  Some would argue, especially his teammates, that he was the only thing that was consistent about offensive attack that spent most of the season poor blocking, dropped passes and other forms of inconsistency.

Bradford passed for 3,725 yards, completed 65 percent of his passes and threw 19 touchdowns and 14 interceptions.  He may have had even more completions and possibly more touchdowns if his teammates had not dropped so many passes. The  Birds led the league in that department with 35.

It would have also helped if Bradford could have an offensive line that played with more consistency. His teammates are hoping he stays when the new coach is hired.

“When you have a good one, you have to make sure you keep him so that’s why we really want him back,” said Eagles wide receivers Jordan Matthews. “We know he’s good for all of us. Everybody has seen his growth.”

Another beneficiary of a change in coaches could be running back DeMarco Murray. Maybe the next Eagles head coach and his coaching staff will do something radical like come up with plays that utilize Murray’s North-South style and return him back to the guy who led the league in rushing in 2014.

Murray was more effective running the football this season during the few times Bradford was under center than he was when he ran from the shotgun.  The zone read involved the running back having to move laterally to find the hole on the cut back rather than go straight up the middle.

“You saw what he does when we work toward his strengths,” Matthews said. “DeMarco’s best run was last game. Sam was under center and he handed it to him. He was right at home. He wasn’t the league’s leading rusher for nothing.”

The Eagles have the nucleus of a pretty good offense for next season with what they have at quarterback and running back, especially when you throw Ryan Mathews and all-pro Darren Sproles into the mix.

Jordan Matthews is a solid receiver and Zach Ertz is a good tight end, but they’re going to need Nelson Agholor to develop into the deep threat the Eagles have been missing since the team released DeSean Jackson.

The new coach will also want to add some pieces to the offensive line to give the Eagles some depth and some consistency.

To be honest, the Eagles are not that far from being a contender for next year if the front office can find the right coach and a few additions to the team to pull it off.