What’s Next? Now that a lucky bounce has sent the Philadelphia 76ers home for the summer, the real work is about to begin 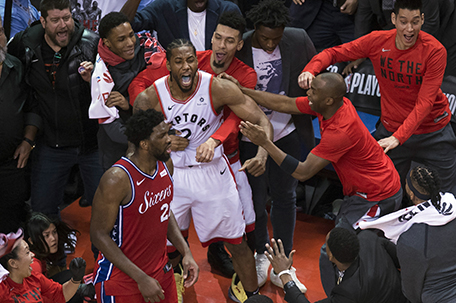 After Kawhi Leonard’s last-second bucket fell to defeat the Philadelphia 76ers in Game 7 of the Eastern Conference semifinals, the speculation about where the Sixers go from here began in earnest.

Will Ben Simmons add a jump shot to his repertoire of skills? Will the team give Jimmy Butler and Tobias Harris max contracts? Will Joel Embiid develop the physical stamina he needs for both the regular season and the playoffs? More importantly, will the 7-2, 280-pound Embiid spend more time learning how to dominate in the low-post and less behind the three-point arc?

One thing that is certain is that head coach Brett Brown will be back for the 2019-2020 season, dashing the hopes of the detractors who have been calling for his head all season. Before the team made that announcement on Monday, the rumor mill said that Brown would be out if the Sixers didn’t make it to the Eastern Conference Finals.

In fact, Brown’s critics flowed out of the woodwork after the team blew several scoring chances late in the fourth quarter. There were four possessions — two 24-second shot clock violations and two turnovers — in the fourth quarter where the Sixers couldn’t get a shot off.

The 76ers were inconsistent on offense and simply couldn’t find a rhythm. While the team had tied the game with four seconds left on a layup by Butler after Harris rebound, they had only managed three field goals in the 5:47 of the game.

But what probably disturbed Sixers fans the most was that Embiid spent too much time around the three-point arc instead of the low post. He scored 21 points on 6-of-18 shooting, but only 1-of-6 from the three-point line.

On social media,  a large number of Sixers fans blamed Brown for the team’s struggles down the stretch and called for his immediate firing. But team managing partner Josh Harris told ESPN that Brown will be back, and his job was never in jeopardy.

“I heard about these rumors and stuff. I just thought it was all  bull-s—t.” Embiid said after his exit interview on Monday.  “He’s done a fantastic job. He’s been there through everything. This year, he grew even more as a coach.  It’s hard when you got five guys that can score the ball and can do a lot of things on the basketball court. It’s hard to put it together. At the end of the day, it comes down to the players… He’s an amazing coach. If there’s someone to blame put it all on me.”

Considering that the Sixers brought in a lot of new players at the trade deadline, Brown somehow got this team to play together despite the relatively short time they’ve played together. If the team can somehow figure out a way to re-sign both Butler and Harris and bring some additional pieces, Brown deserves the benefit of the doubt if only because he’ll have more time to work with this current group of players.

Meanwhile, Embiid said that he is going to work on improving his conditioning and stamina to lead the Sixers playoff run for next season.

What will be among the real tests of the Sixers being a contender will be whether or not, Simmons can improve his shooting skills. It has been a question that has gnawing at Simmons all season, especially during the playoffs.

When asked about it during the exit press conference, an apparently annoyed Simmons gave a terse, one-word answer. But if Simmons is tired of having to answer that question, Sixers fans are equally annoyed that they have a point guard that can’t hit a mid-range jumper.  Not having a decent jump shot limits Simmons’s ability as a playmaking guard. If he doesn’t want that criticism to keep hanging over his head, he might want to work on his shot over the summer.

If the Sixers want to build on the chemistry that got them further in the playoffs than they had ever been, owner Harris and general manager Elton Brand need to figure out a way to sign Butler and Harris.  If they can’t sign both, Butler should be the priority.  Butler’s performance during the playoffs was the consistent element for the Sixers, especially on the offensive end.

Besides, in a locker room filled with young people, you need to have an adult. And during this series, Butler and JJ Reddick were the adults in the room.

I wish them luck. They’re going to need it.

76ers fire Brett Brown after being swept out of playoffs