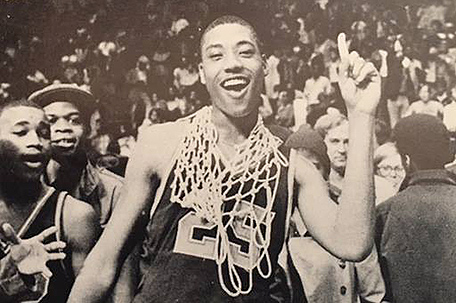 In 1978, Tillman, a 6’ 8” power forward from West Philadelphia High School, played in the first McDonald’s All-American Game at the Philadelphia Spectrum. The talented Speedboys star became the team’s all-time leading scorer in the school’s history.  Tillman started his college basketball career at the University of Kentucky before transferring to Rutgers University after his freshman year and becoming one of the top scorers on the team.

He had a jump shot that was out of sight.

Once his college basketball career was over, Tillman played professional basketball in Europe, South America, and the Caribbean. He finished his pro-career as a great shooter.

In 2017, after learning about his illness, many of his high school teammates gathered together and set up a Go-Fund-Me page so he could get a motorized scooter to help him get around. They raised over $10,000. . Tillman was thankful for what his teammates did for him, and when he received the scooter, they all  gathered for lunch and had a great celebration.

Because of Tillman’s mobility issues and other physical ailments, a stairway railing was built by two of his high school teammates, Vincent Ross and Greg McKinney. The railing stretched from the basement to Tillman’s bedroom and made life easier for him. It was a good deed Tillman would never forget.

In 1977, they went 30-0 for the season and were named the best high school basketball team in the nation after winning the national title in Pittsburgh, Pennsylvania. Together, they won three City Championships and three Public League titles. The Speedboys remained a winning team until the mid 1980s.

On June 6, 2014, the 1977 West Philadelphia Speedboys were recognized for their big accomplishments inside at the new West Philadelphia High School, located at 49th and Chestnut Street. Tillman and several of his teammates were honored on that day by former principal Mary Dean and her staff. The West Philadelphia High gym was packed with Speedboys fans who came out to give honor to the team. Inside the gym, they raised the national championship banner. Clarence Tillman, along with Gene Banks, Darryl Warrick, Mike Powell, and Joe Garrett, smiled in front of the cameras.

In 2017, Tillman was inducted into the Philadelphia Black Basketball Hall of Fame.

Just a week ago, Joe Garrett had just talked to Tillman on the phone. Garrett said they were talking about the Philadelphia 76ers. They were joking about coming out of retirement and playing for the team.

“Since he (Tillman) passed away, I haven’t been able to get much sleep,” Garrett said. “The reality of it hasn’t really hit me yet. It’s more like a dream and more of, like, a shock. It’s something that you don’t want to believe. Clarence Tillman was the one who convinced me to come to West Philadelphia High School to play basketball. We were friends since we were both teenagers.”

Tillman is survived by his wife Carol and a host of family and friends. As of press time, funeral arrangements were pending.