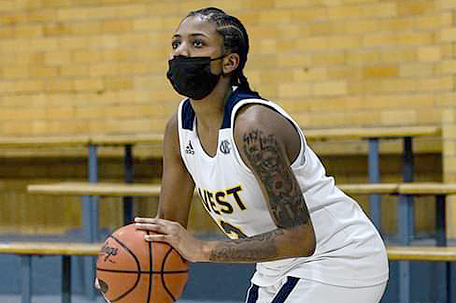 West Catholic basketball star Destiney McPhaul will be competing against some of the nation’s most elite high school basketball players at this year’s Who’s Next All-American Game at the George Gervin Center in San Antonio on April 2.

McPhaul is one of 42 players participating in the game and the only one from Philadelphia. The senior guard is excited about the honor and is working hard to do her best in the All-American game.

“Yeah, there are still workouts for me to do,” said McPhaul, who has averaged over 27 points a game at West Catholic High. “Now, I work out in the morning and then I will do more workouts after school. Sometimes, I will do four workouts a day, depending on how I feel. My workouts [have] gotten a lot harder over the years. I know if I want to get better in basketball, this is what I have to do to get better. In this world, nobody is going to hand you anything. You have to work hard for everything you want in this world.”

Recently, Destiney led the West Catholic Lady Burrs to a District 12 AAA City Title, defeating Imhotep Charter, 57-53. She then went on to score 26 points in West Catholic’s victory against Notre Dame Green Pond in the state semi-finals by a score of 59-33. They’ll be taking on Mohawk Area High School Warriors at the Giant Center in Hershey, Pennsylvania on Thursday for the state title.

This year, the West Catholic Lady Burrs finished the 2021 regular season with a 10-2 record, advancing to the Philadelphia Catholic League playoffs. About three weeks ago, the Lady Burrs lost to Cardinal O’Hara in the Philadelphia Catholic League semi-finals, 57-40. McPhaul was upset about the defeat, but she couldn’t do anymore about it. She scored 30 of the team’s 40 points — all she could do was give thanks for a wonderful basketball season.

Now, she’s about to pack up her bags and catch a plane to San Antonio, Texas. McPhaul’s grandmother, Marsha Baldwin, is going to make sure she has enough food to carry on the trip to the Who’s Next All-American Game.

“I feel awesome about it and I’m proud of Destiney,” Baldwin said. “I feel good she’s advancing and reaching her goals. One thing about Destiney, she treats basketball like a job. Win or lose, she doesn’t get emotional about it. She treats basketball like a regular job. She doesn’t let stuff overwhelm her. She doesn’t get into conversations about it. She’s a bit spooky. But she’s spooky in a good way.”

“She doesn’t go to parties,” Baldwin continued. “She doesn’t smoke weed or drink. She doesn’t do any of that stuff. She’s not like other teenagers. She’s strictly a basketball player. That’s all she knows. When she plays basketball, she plays like a professional. And she’s dedicated to the game. I’m happy to watch her grow. She loves the game of basketball. She keeps telling me she wants to play in the WNBA. I think that’s great. And I think that’s a great dream for her to have. And I think she’s going to make it to the WNBA.”

After McPhaul plays in the Who’s Next All-American Game, she plans to continue her fabulous basketball career at Virginia Tech University.