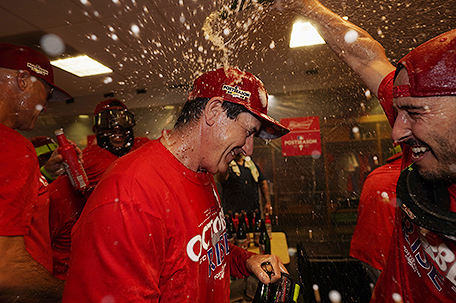 Now that the Philadelphia Phillies have ended their playoff drought, what’s next?

Back on June 1, the Philadelphia Phillies were 22-29 and seemed headed toward another season sitting out the playoffs.

At that point, general manager Dave Dumbrowski decided the team needed another voice at the manager position and replaced Joe Girardi with the quiet calm of Rob Thomson.

All of sudden, the floundering Phillies began thriving off the mild-mannered demeanor of their interim manager and finished the final 109 games of the regular games 65-46 record to clinch their first playoff berth since 2011.

The winner will face the Atlanta Braves in the National League Division Series.

If anything, you have to like the Phillies’ chances against a Cardinals squad that they had beaten four times in seven tough games during the regular season.  For game one, the Phillies will be sending Zack Wheeler (12-7 2.82 Earned Run Average) to the mound.

In his two starts against the Cardinals, Wheeler has not allowed a run in 14 innings on the mound. In those games, the Phillies came away with shutout wins. With all the games being played in St. Louis, the Phillies will need to have a strong outing from Wheeler in Game 1.

Aaron Nola will be on the mound for game 2.

Wheeler and Nola pitched well in the seven games they’ve pitched against Cardinals stars Paul Goldschmidt, who batted .317 with 35 home runs,115 runs batted in, and with an OPS (slugging and on-base percent) of .981, and Nolan Arenado, who batted .293 with 30 homers and 103 runs batted in.

Against Wheeler and Nola, however, the MVP candidates were held to a .222 average.

“They’re a good club,” Thomson recently told NBC Sports Philadelphia. “Obviously, they have [Arenado and Goldschmidt] in the middle who can really hit and really defend. They have good pitching. But we’ve matched up well against them so far this year. That doesn’t matter because this is the playoffs, but I like where we are.”

Then there’s the presence of one Albert Pujos. The veteran slugger batted .270 and hit 24 homers, becoming the third player in baseball history to hit over 700 home runs over his career. While Pujos may be up there in age, he can still knock the ball out of the park.

One of the biggest improvements and perhaps one of the main reasons the Phillies are in the postseason has been the bullpen. Seranthony  Dominguez has been the most consistent of the Phillies relievers this season.  He has a 2.70 ERA, with 60 strikeouts and opposing hitters have just a .185 average against him.

A couple of things that this 2022 version of the Phillies bullpen is that they have, more often than not, limited the damage of difficult outings from the starting rotation, and as a group, they have done a good job of not blowing saves. The Phillies bullpen closed out 70% of its save opportunities.

Offensively, the Phillies have players who are capable of knocking the ball out of the park or coming up with the big hit. Kyle Schwarber, who has playoff experience from his days with the Chicago Cubs and the Washington Nationals, had an outstanding regular season, hitting 46 home runs and driving in 94 runs.

The big key for the Phillies is 2021 MVP Bryce Harper, who was slowed down for a significant amount of time with injuries. If he can find a way to get on a hot streak in this  Wildcard series, Harper could lead the Phillies into a deep run that could propel them for the chance to win a World Series.

If you want to catch the first Phillies postseason game in 11 years, you can see it on 6ABC beginning at 2 p.m. on Friday.