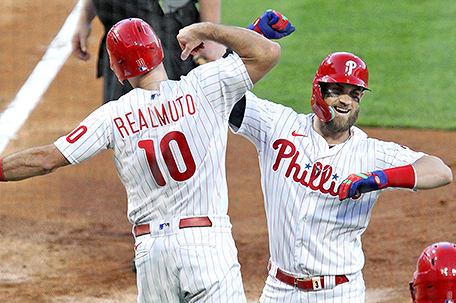 Back at Citizens Bank Park for the first time in 19 days, the Philadelphia Phillies treated a sellout crowd to a 9-1 victory over the Atlanta Braves, complete with serious firepower, great pitching, and the chance to move on.

Especially if you’re a professional baseball player mired in a serious slump at the worst possible time.

The Philadelphia Phillies came into Friday’s Game 3 of the National League Division Series against the Atlanta Braves with the top of the batting order — left fielder Kyle Schwarber, first baseman Rhys Hoskins and catcher J.T. Realmuto — mired in a pretty serious slump. The trio had batted a combined 4-49 in the postseason.

But when the Phillies came back to Citizens Bank Park and a sellout crowd of 45, 538 energetic fans, the top of the order came alive in a big way and led to a 9-1 victory over the defending World Series champions. The Phillies are now up 2-1 in the best-of-five series and could eliminate Atlanta with a win on Saturday.

During his Thursday press conference, Phillies manager Rob Thomson said that a day off after two long weeks on the road would do his big hitters some good.

As it turned out, Thomson was absolutely right.

“One, we needed a day off for some energy. Two, the crowd gave us some energy. I mean that’s as loud as I’ve been around,” Thomson said. “And it was just fantastic. They went from the first pitch to the last pitch and that was unbelievable.”

After being shut out in Game 2 in Atlanta, the Phillies’ offense took control of the game in the bottom of the third. After Braves pitcher Spencer Strider walked centerfielder Brandon Marsh, a misplaced pick-off attempt led to Marsh winding up on third base.

Shortstop Bryson Stott brought Marsh home with an RBI double that began what became an onslaught. Strider, who had dominated the Phillies in the regular season, gave Schwarber an intentional pass, putting men on first and second with one out.

Then Hoskins came to the plate. Because he had gone 1 for 19 at the plate with seven strikeouts in the postseason, was 0-10 against Strider in the regular season, and probably had the memory of an error in the top of the third in his head, it made baseball sense to choose him to pitch to instead of Schwarber.

But the swing that Hoskins took on Strider’s first pitch, and the rather emphatic bat spike that followed it, showed he might have taken that personally.

“They’re obviously telling me something right away before I even step in the box, so I’m ready to compete,” Hoskins said. “And I think when you light a fire under somebody, I tend to hone and focus a little bit more and just didn’t miss.”

Hoskins’s three-run homer made the score 4-0 and when followed by a single by Realmuto, chased Strider from the game.

Unfortunately for the Braves, reliever Dylan Lee didn’t fare much better. His first pitch to designated hitter Bryce Harper became a two-run homer that found its way into Ashburn Alley, turning the stadium into a sea of waving, red, rally towels.

Being able to hang out in your own clubhouse, sleeping in your own bed, and being around your family and friends makes a huge difference and it showed in Friday’s win, Hoskins said.

“I think it kind of settles you a bit,” Hoskins said. “We obviously know what it’s like to hit here. We know how the box (Citizen’s Bank Park) is. It’s all the little things that just add to the comfort of being ready to play.”

The Phillies put the game away in the seventh inning with an RBI double from Harper and an RBI-single from right fielder Nick Castellanos that brought home two more runs. The Braves got on the board in the top of the sixth inning on an RBI single by Michael Harris to score shortstop Dansby Swanson to make it 6-1. But that’s as close as they would get.

On the mound, the Phillies got another outstanding start from pitcher Aaron Nola. In six innings of work, he allowed just one unearned run on five hits and had six strikeouts. From the almost perfect game that he pitched against the Houston Astros to get the Phillies into the postseason to his first two postseason games, Nola has not allowed an earned run. So much for the notion that he can’t win in big game situations.

“I don’t think you can say enough about it really,” Thomson said. “His stuff, his makeup, his toughness, his resiliency. …I thought his stuff was really good tonight. I thought his curveball tonight, especially, was as good as I’ve seen it this year. He’s just pitched extremely well for us.”

Nola, who has pitched against the Braves more than a few times, said it was no mystery. They know him and he knows them. It’s just a matter of getting the job done.

“The plan is to get the lead-off guy out and really execute all my pitches as best I can,” Nola said. “I know they’re going to be aggressive up there. And I’ve faced them a lot. They know all my pitches … It just comes down to executing.”

Whether or not the Phillies will advance to their first National League Championship Series appearance since 2010 will depend on the arm of right-hander Noah Syndergaard. The Phillies acquired Syndergaard at the trade deadline from the Los Angeles Angels and are hoping he can hold his own against Braves right-handed pitcher Charlie Morton.

To see if they’re successful, you can catch the game on Fox Sports 1. The pregame show begins at 1 p.m., and the first pitch is scheduled for 2:07 p.m.