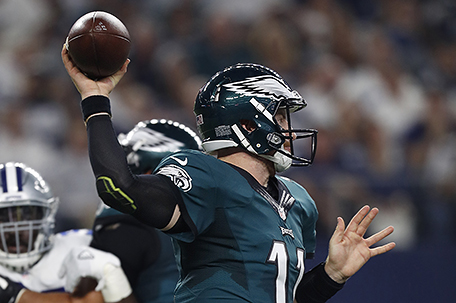 The Philadelphia Eagles will have plenty of offensive weapons on hand to help quarterback Carson Wentz this season. But can he stay healthy enough to utilize them?

Depending upon the website or supermarket preseason football preview publication you follow, either the Philadelphia Eagles or the hated Dallas Cowboys appear to be the favorites to win the NFC East or at least get to the playoffs as a wild card team.

As the Eagles begin their 2019 training camp at the team’s NovaCare practice facility in South Philadelphia, all eyes will no doubt be on quarterback Carson Wentz and whether or not he can stay healthy enough to get through a full season and lead the team back to the Super Bowl.

After a controversial January 2019 PhillyVoice.com article by Joseph Santaloquido was published, in which several “unnamed” teammates labeled him as “selfish,” Wentz has been at work getting ready for the season. The team itself, behind VP of football operations Howie Roseman, has committed to giving Wentz as many weapons as he’s going to need for the Birds to be strong enough to make another run to the Super Bowl.

If you look at the team’s offense on paper, there’s a reason why some experts are picking the Eagles to win the East. For one thing, the Birds have brought back speedy wide receiver DeSean Jackson.  At 32-years-old, Jackson still has the ability to stretch the defense with his speed in the vertical passing game, something he’s shown during OTAs and minicamp.

The Eagles will have a crowded receivers room coming into the 2019 season with second-year tight end Dallas Goedert. Also joining the squad is former Stanford star and second-round draft pick J.J. Arcega-Whitehead.

If he’s as good as his stats and the film from his final collegiate season suggests, the Eagles will have another big target in the red zone.  At 6-3, 225 pounds, Arcega-White caught 63 passes for 1,059 yards and 14 touchdowns in his last season at Stanford.  Watching him on film, Arcega-Whitehead has the ability and the strength to win those 50-50 jump balls in the end zone. Several observers around the Eagles are expecting Arcega-Whitehead to get more than a few balls thrown his way.

Meanwhile, things in the Eagles running back room got more than interesting with the acquisition of former Chicago Bears running back Jordan Howard and second-round draft pick and former Penn State star Miles Sanders.

During his first two seasons with the Bears, Howard had 1,000-yard plus seasons and was averaging over four yards per carry.  But in 2018, Howard saw his numbers reduced as the Bears, under first-year head coach Matt Nagy, wanted to be more of a passing team.

Howard gained 935 yards last season and averaged a career-low 3.7 yards per carry. He scored nine touchdowns on the ground.  That said, Howard has proven that he can catch out of the backfield. He has caught 20 or more passes in each of his three seasons in the league.

Sanders claim to fame was that he succeeded Saquon Barkley, last year’s Rookie of the Year with the New York Giants.  In his final season at Penn State, Sanders managed to escape from Barkley’s shadow by gaining 1,274 yards and scoring nine touchdowns. He averaged 5.8 yards per carry.  He didn’t get on the field too much during OTAs because of hamstring injury.

The Eagles will also return Corey Clement, Wendell Smallwood and Josh Adams who will be battling just to stay with the team. With the Eagles signing veteran Darren Sproles to a one-year contract, Roseman and head coach Doug Pederson have made it clear that he will be the Birds third down back.

Sproles still has the speed in both the running and passing game to keep opposing defensive coordinators up late trying to figure out the Eagles offense.  In six games last season, Sproles had 280 yards from scrimmage and scored two receiving touchdowns and one rushing touchdown.

For all the weapons the Eagles have at the skill positions, the offensive line is a bit of a mystery this season. Granted, the Birds will still have players like center Jason Kelce, Lane Johnson and nine-time veteran Pro Bowler 37-year-old Jason Peters, but there are still question marks.

One of these question marks is whether or not the Birds are going to have the services of right guard Brandon Brooks, who is coming off an Achilles tendon injury he sustained back in January. He may not be back until sometime in November or December.

Meanwhile, the Eagles did draft Andre Dillard (6-5, 315) to be the heir apparent to Peters at the left tackle. Expect Dillard to get some time at Peters’ spot because Peters is susceptible to getting either seriously injured or getting dinged up with some minor injury.

The Eagles will have veterans like Stefan Wisniewski and Halapoulivaati Vaitai who can fill the void at both the guard and tackle positions.

While folks like to focus on the health of Wentz, the health of the offensive line could determine how far the Birds will go in 2019.

To follow the Philadelphia Eagles as they get ready for the 2019-2020 NFL season, keep reading the SUN. You can also follow me @thechrismurrayreport on Twitter or catch me on my show on 900AM/96.1FM WURD, The Chris Murray Report on Saturdays from 11am-1pm to stay on top of your Philadelphia Eagles.