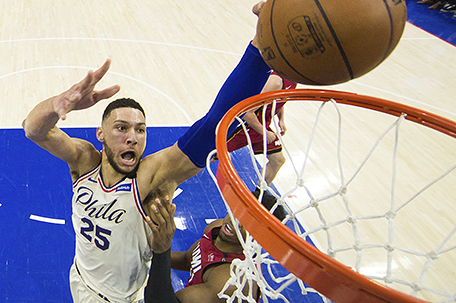 For the first time since 2012, your Philadelphia 76ers are moving on to the NBA Eastern Conference Semifinals.

At the beginning of the NBA Playoffs, my prediction was that LeBron James and the Cleveland Cavaliers were a lock to go back to the NBA Finals for a matchup with the defending champion Golden State Warriors.

But after observing the Eastern Conference playoffs for a couple of weeks, I’ve realized that LeBron and the Cavaliers aren’t invincible. James may be the greatest player on the planet, but he can’t do it alone. And while the top two seeds — the Toronto Raptors and the Boston Celtics — are pretty good teams, I wouldn’t call either of them a lock for the NBA Finals.

Especially after watching your Philadelphia 76ers run the Miami Heat out of the playoffs in five games.

What the Sixers proved in their first-round rout of a very physical Miami squad is that they have the offensive firepower to hang with and possibly beat any of the contenders in the Eastern Conference, especially with a leader like Ben Simmons, who averaged close to a triple-double in the five games against the Heat. (19 points, 10 rebounds, and 9.8 assists).

Contrary to popular belief, Simmons didn’t need a jump shot to lead the Sixers past the Heat. He didn’t just take what the defense gave him, he stormed the lane and took what he wanted. Simmons also used his 6-10 frame to get in the low post to score points or to set up teammates cutting to the basket and at the three-point line.

The Sixers also have plenty of firepower from three-point range with veteran J.J. Reddick, who scored 22 points in the Sixers series-clinching win over the Heat, Marco Belinelli, Ersan Ilyasova and Robert Covington.  Sometimes, they can even count on a three-point bucket from center Joel Embiid.

The series also showed how important Embiid is to the team on the low-post both offensively and defensively. After not playing in the first two games of the Heat series while recovering from an orbital bone fracture, Embiid averaged 18 points and close to 10 rebounds per game.

While the team looks like it can take on all comers, Sixers coach Brett Brown has no illusions that the next round is going to be easy. The Sixers get the winner of the Celtics/Milwaukee Bucks series and both teams gave them all they could handle in the regular season. Boston won three of the four games they played and the team split its season series with Milwaukee.

“We’ve got a fist fight coming again,” Brown said. “We’ve had a tremendous battles with Boston this whole season and we’ve had some erratic games with Milwaukee.  … We just know we’ve got something coming around the corner that’s going be even more difficult.  This group has more to give.”

The NBA Eastern Conference Semifinals could begin as early as next week.

The Battle for Rookie Supremacy